A Note On Indications For Removal Of Impacted Teeth

Specialists have divergent points of view concerning the necessity to extract impacted teeth.
Certain people suggest that the removal of impacted teeth is necessary as soon as their presence is confirmed, which is usually by chance. They even believe that it must be done as soon as possible, as long as there is no possibility that the impacted tooth may be Brought into alignment in the dental arch using a Combination of orthodontic and surgical techniques.  On the other hand, others suggest that the preventive
Removal of asymptomatic impacted teeth, besides subjecting the patient to undue discomfort, entails the risk of causing serious local complications (e.g., nerve damage, displacement of the tooth into the maxillary sinus, fracture of the maxillary tuberosity, loss of sup-port of adjacent teeth, etc.). As far as impacted teeth that have already caused problems are concerned, everyone agrees that they should be removed, regardless  of the degree of difficulty of the surgical procedure. The most common of these problems are now given.
Localized or Generalized Neuralgias of the Head
Impacted teeth may be responsible for a variety of symptoms related to headaches and various types of neuralgias. If this is the case, the pain may be due to pressure exerted by the impacted tooth where it comes into contact with many nerve endings. Many people suggest that the symptoms may subside after the removal of the offending tooth, which basically involves ectopic impacted teeth.
Pericoronitis 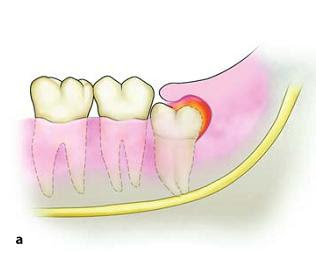 This is an acute infection of the soft tissues covering the semi-impacted tooth and the associated follicle. This condition may be due to injury of the operculum (soft tissues covering the tooth) by the antagonist third molar or because of entrapment of food under the operculum, resulting in bacterial invasion and infection of the area. After inflammation occurs, it remains permanent and causes acute episodes from time to time. It presents as severe pain in the region of the affected tooth, which radiates to the ear, temporomandibular  joint, and posterior submandibular region. Trismus, difficulty in swallowing, submandibular lymphadenitis, rubor, and edema of the operculum are also noted. A characteristic of pericoronitis is that when pressure is applied to the operculum, severe pain and discharge of pus are observed. Acute pericoronitis is often responsible for the spread of infection to various regions of the neck and facial area.
Production of Caries
Entrapment of food particles and bad hygiene, due to the presence of the semi-impacted tooth, may cause caries at the distal surface of the second molar, as well as on the crown of the impacted tooth itself.
Decreased Bone Support of Second Molar
The well-timed extraction of a semi-impacted tooth presenting a periodontal pocket ensures the avoidance of resorption of the distal bone aspect of the second molar, which would result in a decrease of its support.
Obstruction of Placement of a Partial or Complete  Denture
The impacted teeth of edentulous patients can erupt towards the residual alveolar ridge, creating problems when applying a prosthesis. The localization of the tooth is often observed after its communication with the oral cavity and the presence of pain and edema.
Obstruction of the Normal Eruption of Permanent Teeth.
Impacted teeth and supernumerary teeth often hinder the normal eruption of permanent teeth,creating functional and esthetic problems.
Provoking or Aggravating Orthodontic Problems
Lack of room in the arch is possibly the most common indication for extraction, primarily of impacted and semi-impacted third molars of the maxilla and mandible.
Participation in the Development of Various Pathologic Conditions
The coexistence of an impacted tooth and various pathologic conditions is not an uncommon phenomenon. Often cystic lesions develop around the crown of the tooth and are depicted on the radiograph as different-sized radiolucencies. These cysts may be large and may displace the impacted tooth to any position in the jaw. When the presence of such osteolytic lesions is verified radiographically, they must be removed together with the associated impacted tooth.
Destruction of Adjacent Teeth Due to Resorption of Roots
Resorption of the roots of adjacent teeth is another undesirable situation that may be caused by the impacted tooth; the effect is brought about through pressure. This case primarily involves the posterior teethofthemaxillaandmandible.Itbeginswithresorptionofthedistalrootand,eventually, may totally destroy the tooth. The resorption of roots may also be observed in other areas of the dental arch and may involve dental surfaces other than those mentioned above.
Having mentioned the undesirable situations that are associated with impacted teeth, and given the fact that no one can guarantee that an asymptomatic impacted tooth will not create problems in the future, the choice of removing or preserving the impacted tooth must be made after considering all the possibilities.
Posted by Upul Cooray at 1:01 AM