The temporomandibular joint (TMJ) is the site of articulation between the mandible and the skull, specifically the area about the articular eminence of the temporal bone. This bilateral joint functions to open and close the jaws and to approximate the teeth of the opposing arches during mastication. The articulation consists of parts of the mandible and temporal bones, which are covered by dense, fibrous connective tissue and are surrounded by several ligaments.

Interposed between the two bones is a fibrous articular disc, compartmentalizing the joint into two separate synovial-lined cavities. Several pairs of muscles attached to the mandible produce the movements necessary to suckle, ingest, and masticate food; swallow; yawn; and produce speech.
Interrelationships of the stomatognathic system in occlusion, neuromuscular function, and temporomandibular articulation are of paramount importance to the dental professional because treatment of any component affects the functioning of this entire system.

JOINT ANATOMY
Mandible
The mandible possesses two articular surfaces, a condyle (head) located on the superior extremity of each of the bilateral condylar processes. Each condyle articulates with a disc that is interposed between it and the temporal bone.
The condyles, which are characteristically “football-shaped,” measure about 20 mm through the long mediolateral axis and 10 mm through the anteroposterior axis. The condyles are directed at an oblique angle to each other and to the frontal plane so that if the planes of the long axes were continued they would meet at the foramen magnum. The long axis is also at right angles to the ramus of the mandible. Anteriorly, the condyle is strongly convex, whereas posteriorly, the convexity is reduced to medial and lateral slopes. This resembles (from a lateral view) the profile of an anteriorly tilted clenched fist. It is important to remember, however, that individual variations do exist in the shape, form, and size of the mandibular condyle—variations that may be caused by any one or a combination of factors, including heredity and functional adaptation. 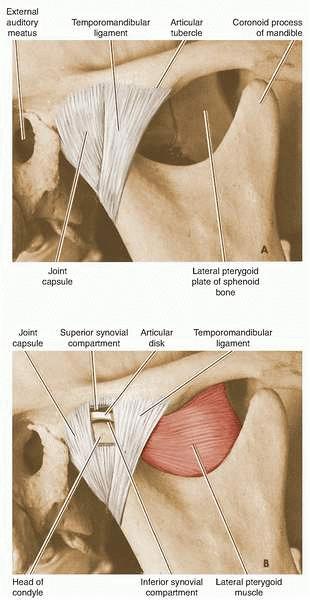 Temporal Bone
The site of TMJ articulation on the temporal bone is on the inferior surface of the zygomatic process. The specific location is situated on the posterior slope of the articular eminence. The term “articular eminence,” as it applies here, replaced the term “articular tubercle” by those specializing in the study of the temporomandibular articulation. Although the new term has not as yet been adopted universally by anatomists, it will be used in this text because it is the term most often used in the literature regarding the TMJ.
The articular eminence is defined as the strongly convex bony elevation on the root of the zygomatic process representing the anterior-most boundary of the articular or mandibular fossa (also referred to as the glenoid fossa). The articular tubercle is the bony “knob” on the lateral aspect of the articular eminence, where the fibrous capsule and the temporomandibular ligament attach.
It would appear in the dried skull that, lying immediately anterior to the external auditory meatus, the mandibular condyle articulates within the mandibular fossa between the bony articular eminence and the postglenoid process. However, close observation of the mandibular (glenoid) fossa reveals a rather thin bony roof separating it from the middle cranial fossa. This fact, coupled with the knowledge of the biconcave anatomy of the disc, simply does not support the conclusion that the roof of the mandibular fossa can function as the stress-bearing articulation. Indeed, radiographic evidence indicates that the TMJ articulation occurs against the slope of the articular eminence.
Articular Disc
The articular disc is a compact, dense, and fibrous connective tissue plate that is oval and contoured to fit between the mandibular condyle and the articular eminence of the temporal bone.
The inferior surface of the disc is concavely contoured to fit the convex condyle of the mandible. Superiorly, its surface is concavoconvex. The convex portion conforms to the concave mandibular fossa posteriorly, whereas anteriorly, the disc becomes concave to fit the convex posterior aspect of the articular eminence.
The disc is thickest at its periphery and thinnest at the stress-bearing area of the joint. Peripherally, the disc becomes less dense as it merges into the surrounding capsule.
Posteriorly, the disc is attached to a highly vascular connective tissue known as the retrodiscal tissue. Occasionally, the disc (especially of older individuals) becomes perforated at its center, where it is thinnest.
Articular Coverings
The coverings of the articular surfaces of the condyle and the slope of the articular eminence are composed of dense, collagenous connective tissue overlying a thin proliferative layer of cells associated with the underlying hyaline cartilage.
It is reported that the hyaline cartilage of the condyle is present while the individual is still growing, until about 20 years of age, whereas the cartilage covering the articular eminence has a shorter life span. At the termination of growth, this cartilage layer is replaced by compact bone.
In the adult, the compact bone of the condyle is covered by a layer of fibrocartilage that, in turn, is covered by a thin layer of proliferative tissue. Cells of the proliferative layer may become activated to function in remodeling of the joint as a result of changes in function, wear, and tooth movement. Superficial to the proliferative layer is a relatively thick layer of dense, irregular collagenous connective tissue whose deeper layers house fibroblasts.
Although the articular structures are avascular, they are bathed in synovial fluid, which provides lubrication and nourishment for the cellular coverings.
Peripheral regions of the disc are very vascular, whereas the central, stress-bearing portion is devoid of blood vessels.
Capsule
The TMJ capsule, composed of dense, irregular collagenous connective tissue, encloses the entire articulating region of the temporal bone, disc, and mandibular condyle, sealing the joint space.
Superiorly, the capsule is attached to the temporal bone about the circumference of the mandibular fossa and, anteriorly, around the articular eminence. Inferiorly, the capsule is attached to the mandibular neck. The placement of the disc between the two articulating bones and its peripheral attachments to the walls of the capsule causes the capsule space to be divided into separate compartments.
The larger, superior compartment between the disc and temporal bone permits some freedom of movement between the disc and articular eminence.
Anteriorly, the capsule and disc are tightly fused, permitting the insertion of some fibers of the lateral pterygoid muscle into the disc. Medially and laterally, the capsule and disc are attached to the condyle margins, thus necessitating associated simultaneous movement of the condyle and disc.
The inferior compartment encloses the entire neck of the mandible and is more firmly attached to the disc. This attachment prohibits excessive movement between the disc and condyle.
Innervation and Vascularization 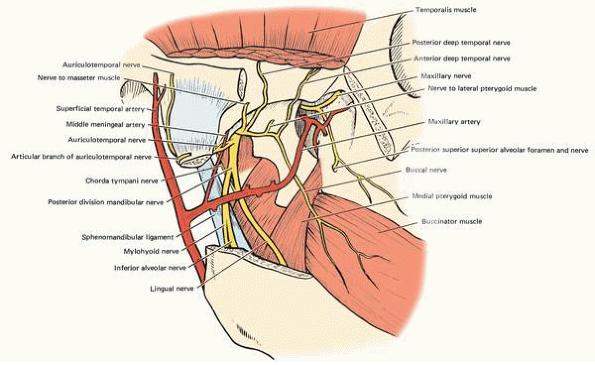 The joint capsule is richly endowed with sensory endings from the mandibular division of the trigeminal nerve, most of which are supplied from articular branches of the auriculotemporal nerve. Additional articular branches supplying the joint are derived from the masseteric branch of the mandibular division of the trigeminal nerve. Vascular supply to the joint is provided by branches of the superficial temporal and maxillary arteries as they approximate the joint.
Ligaments 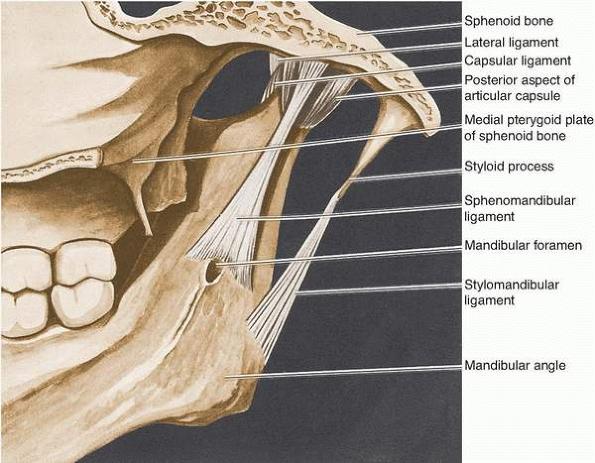