Rationale Behind Axial Positioning Of Implants

Axial Positioning Rationale
Implant positioning in relation to its axial level inﬂuences the amount of exposure the ﬁnal restoration will receive, which in turn dramatically affects the esthetic outcome of the restoration (Jansen and Weisgold 1995). Apico-incisal positioning is no less important than the mesiodistal and labiopalatal positioning aspects of the implant. Unfortunately, surgical templates that offer apicoincisal positioning guidance for functional or esthetic implant placement are few. They are often difﬁcult to fabricate and they are not cost effective. Most of the recent computer-generated templates have a metallic stop to control the apical extent of the drill. The optimal axial positioning of the implant head allows the ﬁnal restoration to emerge naturally through the marginal gingival tissues with no violation to the gingival sulcus (Wheeler 1974), allowing the contours of the restoration to develop in a progressive manner within the peri-implant soft tissue housing. As a result, the ﬁnal prosthetic result appears as if it emerges naturally.
Several factors control the location of the implant head in an axial dimension, including
(1) the amount of space available for restoration,
(2) the topography of the remaining bone,
(3) the marginal gingival location of the adjacent natural teeth, and
(4) the selected implant diameter.
The optimal axial location of the implant head is necessary due to the anatomical difference between the ﬁxture morphology and that of the natural tooth at the cervical level. A morphological transition from the narrow circular implant neck from the implant head to that of the natural tooth form is naturally required.
The reference location of all axial implant positioning is an imaginary line connecting the gingival zeniths of the adjacent natural teeth. There is a greater urgency for restoring natural gingival contours surrounding the new restorations when a natural tooth reference is missing and multiple adjacent implants are to be used. These implants should be placed at the alveolar crest within the circumference of the missing teeth to be restored. This enables the clinician to develop appropriate natural embrasures on both sides adjoining the restorations and duplicate a natural gingival proﬁle (Potashnick 1998). The ideal apico-incisal implant positioning places the implant head 2 mm to 3 mm apical to the line connecting the gingival zeniths of the adjacent natural teeth. This subsequently allows “running room” throughout the biological width of the implant when it is correctly positioned in an apicoincisal plane (Parel and Sullivan 1989), as shown in figure. 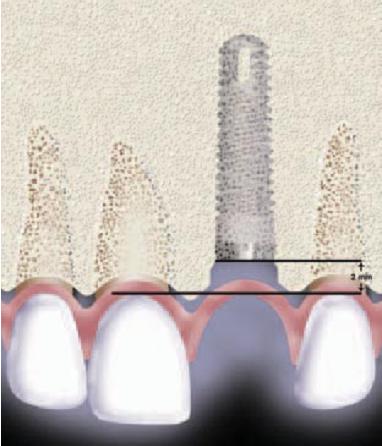 An illustration showing the ideal axial positioning of the implant, 2–3 mm from the line connecting the gingival zenith of the natural teeth.

The “running room” is a space of 2 mm to 3 mm in depth and it surrounds the implant head circum-ferentially, as shown in Figure. 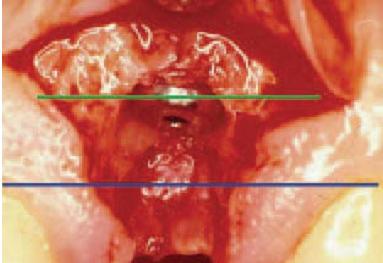 This room allows for stacking or building up of prosthetic components to create the natural gingival emergence of the ﬁnal restoration. If any modiﬁcation or expansion of the gingival tissues to match the original crown size takes place in this particular space, the progressive use of the pro-visional restoration will develop the original crosssectional shape of the missing natural tooth. The use of anatomical abutments has not proven to be more effective than the progressive use of the provisional restoration. Because the gingival tissue does not have a memory to keep its original dimensions without existing support, the peri-implant soft tissue tends to collapse and regain its original circular shape (due to the pressure from the circular collagen ﬁbers surrounding the biological seal) upon its removal from the gingival sulcus. Clinically speaking, natural biological contours could be replicated without the need for anatomical abutments. Provisional prostheses have proven to give an optimal gingival inﬂuence with great clinical predictability. 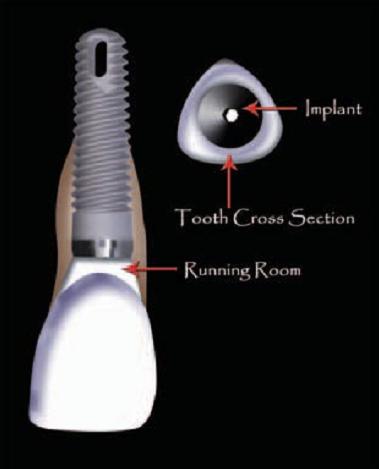 An illustration showing the difference in cross section between implant and natural tooth and the running room.

Implant diameter has an inverse relationship to the amount of subgingival sinking. It inﬂuences the amount of axial sinking of the implant head, because implants with wide diameters eventually require less space for making the transition into a natural tooth form than narrow-diameter implants. Bear in mind that not all the biological concepts are violated. The screw design implant ranks ﬁrst to allow a more precise axial placement than the cylindrical designs. Its mechanical characters allow control of the depth while threading the ﬁxture in the bone. The cylinder design, on the other hand, requires the use of an implant retrieval tool to adjust the implant’s optimal vertical position, which makes the procedure difﬁcult to control. 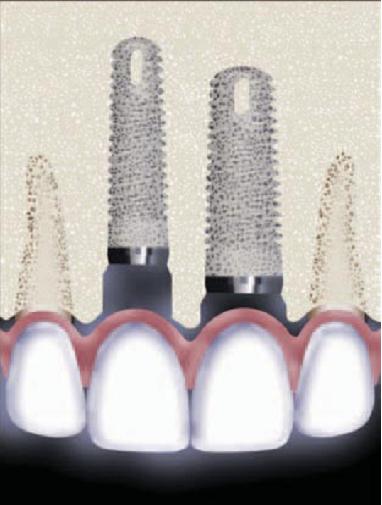 An illustration showing that wider implants require less apical positioning.
Gingival zenith of the adjacent natural teeth is considered to be the landmark or the reference in apico-incisal implant positioning. Therefore, for a number of reasons, it is recommended that the location of the implant head be related to a line connecting the gingival zenith of the adjacent remaining natural dentition rather than to a line connecting the CEJ or the crest of the ridge. For instance, the gingival zenith is not a static landmark; it sometimes moves apically, such as in the case of gingival recession, because it represents the actual clinical marginal level of the soft tissue at the time of implant placement. In contrast, the CEJ is a constantly static landmark. It follows a uniformly ﬁxed scalloped path along the root surface. It also pursues a wavy course that has a rise and fall on both buccolingual and interproximal margins. This scalloped line does not move when gingival recession occurs, thus it does not allow for optimal apicoincisal positioning in the case of gingival recession and in cases of placing an implant in unbalanced soft tissue margins. 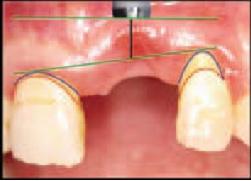 Also, the wavy course of the CEJ does not give a table reference with which to measure. The use of the deepest part of the gingival zenith allows the ﬁnal implant-supported restoration to attain the same marginal level as those existing around natural dentition, as shown in following figure. 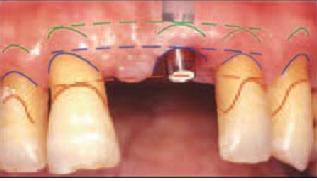 The crest of the ridge is a less than ideal reference point for making a measurement to relate the implant head because the nature of bone resorption sometimes makes it variable in its levels. In other words, in many instances the osseous housing is not the optimal land-mark. Soft tissue thickness on top of it can be variable as well, which might lead to unpredictable variable measurements, as shown in following figure. 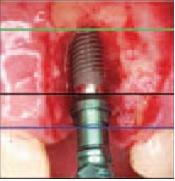 For example, when the alveolar ridge has undergone a process of vertical osseous resorption, the implant head will eventually be situated above the bone level. Therefore, the osseous crest should not be taken as a reference measuring point.