A NOTE ON ANATOMY OF PAROTID GLAND

The parotid gland is the largest of the salivary glands.

The parotid, a serous compound tubulo-alveolar gland, is yellowish, lobulated, and irregular in shape.

It occupies the interval between the sternomastoid muscle and the mandible. 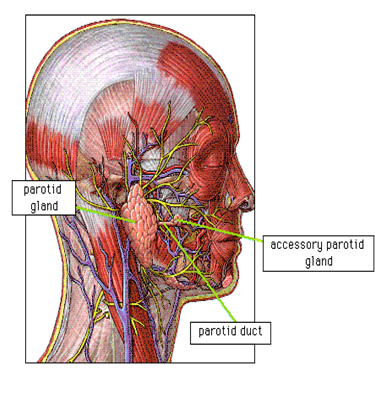 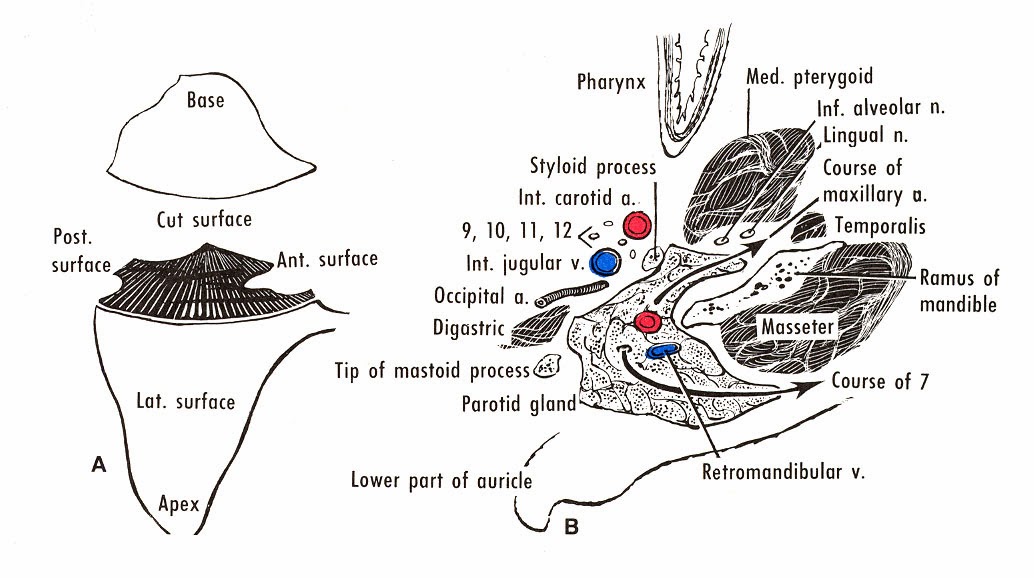 The parotid gland is enclosed in a sheath (parotid fascia) and is shaped roughly like an inverted pyramid, with three (or four) sides (fig A).

It has a base (from which the superficial temporal vessels and auriculotemporal nerve emerge),apex (which descends inferior and posterior to the angle of the mandible),and lateral, anterior, and posterior (or posterior and medial) surfaces. 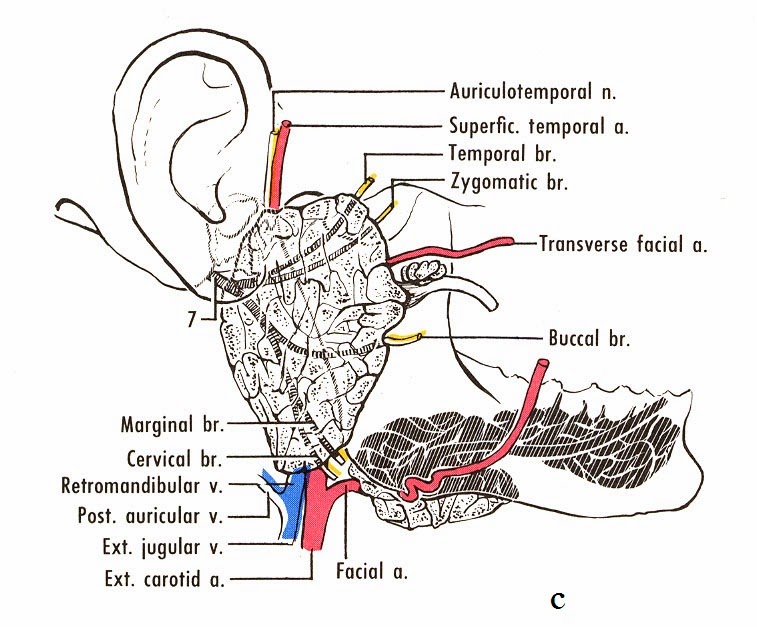 The lateral surface is superficial and contains lymph nodes.

The anterior surface is grooved by the ramus of the mandible and masseter (fig.B), producing a medial lip (from which the maxillary artery emerges) and a lateral lip, under cover of which the parotid duct, branches of the facial nerve, and the transverse facial artery emerge (see fig. C).

The posterior surface is grooved by  the mastoid process and the sternomastoid and digastric muscles and  more medially by the styloid process and its attached muscles.

Medially, the superior part of the gland is pierced by the facial nerve and the inferior part by the external carotid artery.

The following structures lie partly within the parotid gland, from superficial to deep:

1. The facial nerve forms the parotid plexus within the gland and separates the glandular tissue partially into superficial and deep layers ("lobes"). In surgical excision of the parotid gland (e.g., for a tumor), damage to the facial nerve is a possibility.

2. The superficial temporal and maxillary veins unite in the gland to form the retromandibular vein, which contributes in a variable manner to the formation of the external jugular vein (see fig. D).

3. The external carotid artery divides within the parotid gland into the superficial temporal and maxillary arteries. 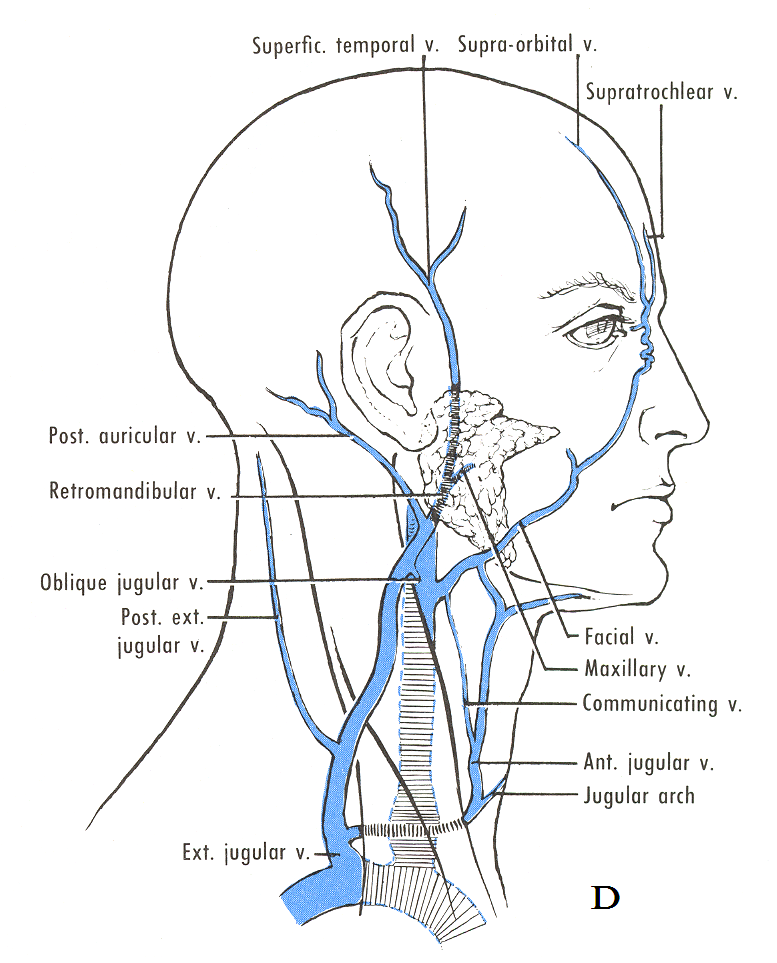 The parotid duct is about 7 cm long

The parotid duct, emerging under cover of the lateral surface, runs anteriorward on the masseter and turns medially to pierce the buccinator.

The branching of the duct can be examined radiographically after injection of a radio-opaque medium.

The parotid duct, which is palpable, opens into the oral cavity on the parotid papilla opposite the upper second molar tooth. 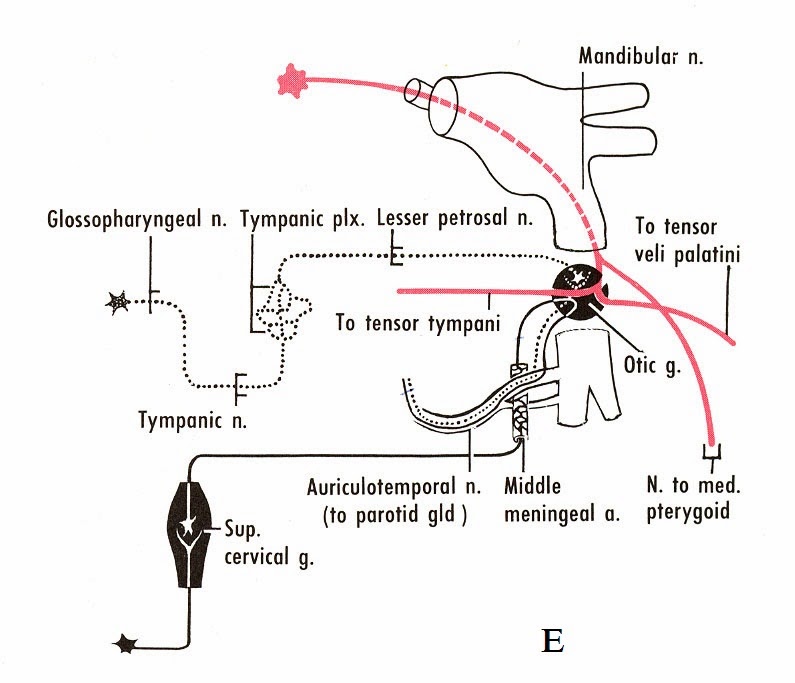 Postganglionic fibers travel with the auriculotemporal nerve and so reach the gland.

Cranial nerves VII and IX communicate, so that secretory fibers to each of the three major salivary glands may travel in both the facial and glossopharyngeal nerves.

The sympathetic supply to the salivary glands includes vasomotor fibers.

The arteries supplying the parotid gland are derived from the external carotid, and from the branches given off by that vessel in or near its substance. The veins empty themselves into the external jugular, through some of its tributaries.

The lymphatics end in the superficial and deep cervical lymph glands, passing in their course through two or three glands, placed on the surface and in the substance of the parotid.