There are bewildering array of different orthodontic appliances. However, they fall into four main categories of removable, fixed, functional and extra-oral devices. The appliance has to be selected with care and used correctly as inappropriate use can make the malocclusion worse. Removable appliances are only capable of very simple movements whereas fixed appliances are sophisticated devices, which can precisely position the teeth. Functional appliances are useful in difficult cases and are primarily used for Class II Division I malocclusions. Extra-oral devices are used to re-enforce anchorage and can be an aid in both opening and closing spaces.
REMOVABLE APPLIANCES
In general these are only capable of simple tooth movement, such as tipping teeth. Bodily movement is very difficult to achieve with any degree of consistency and precise tooth detailing and multiple tooth movements are rarely satisfactory. These appliances have received bad press over the past few years because studies have shown that the treatment outcomes achieved can often be poor. In these studies as many as 50% of cases treated with removable appliances were either not improved or worse than at the start of treatment. When faced with evidence such as this, one might be justified in discarding removable appliances completely. However, provided they are used in properly selected cases they still can be very useful devices and the treatment outcome can be satisfactory. In general, removable appliances are only recommended for the following:
Thumb deterrent
Digit sucking habits which persist into the teenage years can sometimes be hard to break and may result in either a posterior buccal cross bite or an anterior open bite with proclination of the upper and retroclination of the lower incisors. In general, if the habit stops before facial growth is complete then the anterior open bite usually resolves spontaneously and the overjet returns to normal.
Following fig 1a-c show a case with an anterior open bite associated with an avid digit sucking habit. A simple upper removable appliance was used successfully to stop the habit. The appliance simply makes the habit feel less of a comfort and acts as a reminder to the patient that they should stop sucking the thumb. Complex appliances with bars or tongue cribs are rarely needed. In this patient once the habit had stopped the open bite closed down on its own without the need for further orthodontic treatment. 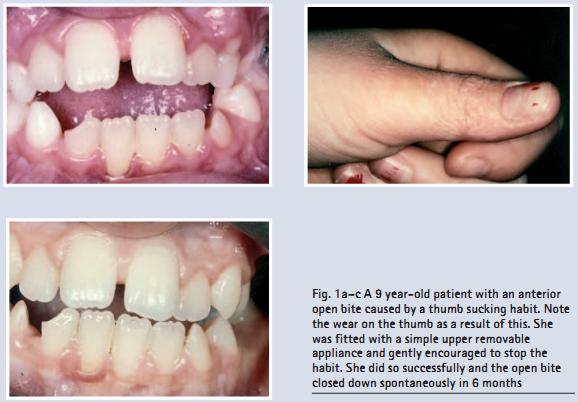 Tipping
One of the major uses of removable appliances is to move one incisor over the bite as shown in Figure 2a-d. 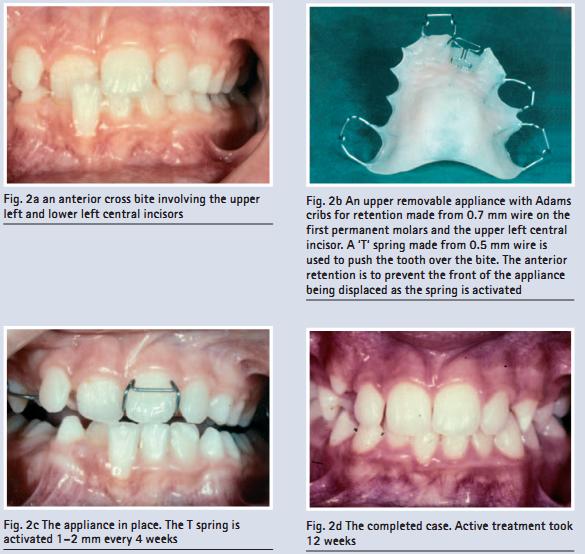 A simple upper removable appliance utilized a ‘T’ spring constructed from 0.5 mm wire activated 1–2 mm which delivered a force of about 30 g to the tooth. After only a few weeks the cross bite was corrected without the need for complex treatment. Note the anterior retaining clasp that prevents the appliance from displacing downwards when the spring is activated.
If teeth are to be pushed over the bite with removable appliances, a stable result is more likely to be achieved if the tooth is retroclined in the first instance, the overbite is deep and there is an anterior mandibular displacement associated with a premature contact. Tipping teeth tends to reduce the overbite because the tip of the tooth moves along the arc of a circle as shown in Figure 3a. Excessive tipping may also make the tooth too horizontal which can be not only aesthetically unacceptable but may also result in excessive non-axial loading of the tooth as illustrated in Figure 3b.
Overbite reduction when teeth are over proclined is illustrated in Figures 4a–d. In this case both the upper lateral incisors were pushed over the bite with an upper removable appliance. The cross bite was corrected but note the reduction in overbite on the lateral incisors. Six months after completion of treatment the upper right lateral had relapsed back into cross bite. 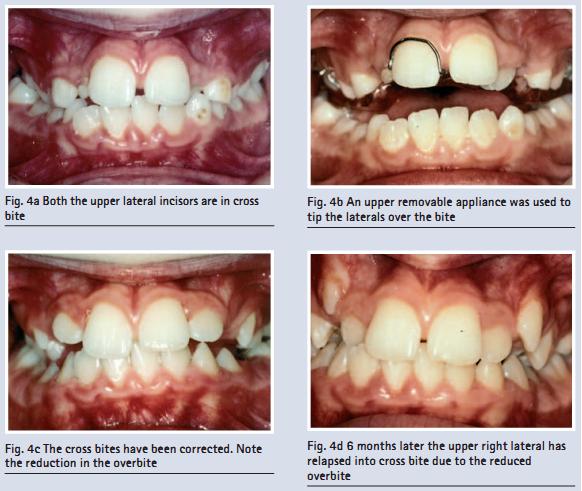 Block movements
If a cross bite involves a number of teeth, for example a unilateral buccal cross bite, removable appliances can be used to correct this. The sequence of events is shown in Figures 5a–f. Adams cribs are generally placed on the first premolars and the first permanent molars and a midline expansion screw is incorporated into the base plate.  This midline screw is opened 0.25 mm (one quarter turn) twice a week until the cross bite is slightly overcorrected. Posterior buccal capping can also be used to disengage the bite and prevent concomitant expansion of the lower arch. Once the cross bite is corrected the buccal capping can be removed and the appliance used as a retainer to allow the buccal occlusion to settle in. Occasionally two appliances will be needed if a considerable amount of expansion is needed. Overbite reduction
Removable appliances are very effective in correcting a deep overbite, especially in a growing patient. An upper removable appliance with an anterior bite plane is used which disengages the molars by 2–3 mm whilst at the same time establishing lower incisor contact with the bite plane (Fig. 6). Eruption of the posterior teeth produces a reduction in the overbite. It is essential that the inter-incisor angle is corrected at the completion of treatment so that an occlusal stop between the upper and lower incisors is produced preventing re-eruption of the incisors and a relapse of the overbite. Bite planes are usually used in conjunction with fixed appliances to help the overbite reduction (Figures7a–d) or can be used as an aid to restoration of the anterior teeth. Figures 8a–d show a patient with a deep bite who had marked enamel erosion. Porcelain crowns were to be placed on the anterior teeth to restore them, but the deep bite made this technically difficult. The overbite was therefore reduced with a bite plane to make room for the crowns. 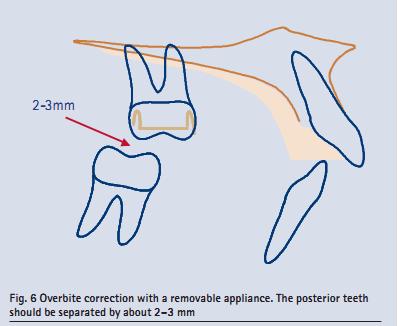 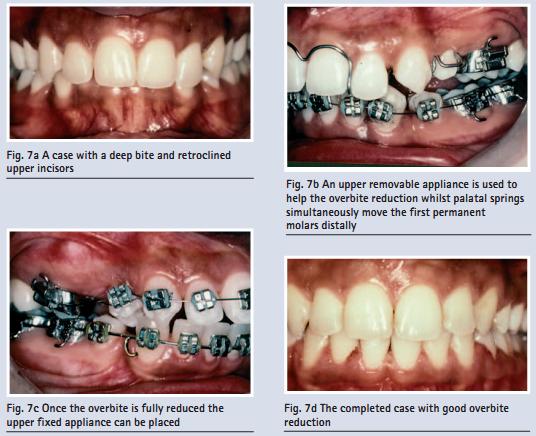 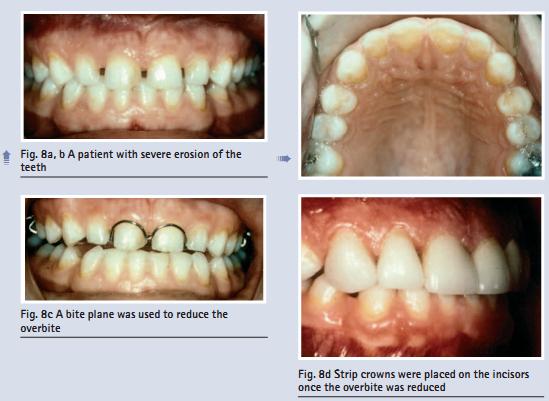 Space maintenance
Space maintainers are rarely indicated in orthodontic treatment but occasionally can be used,  particularly if the upper canine is buccally crowded. Whilst the extraction of the first premolars will often create space for the canines, there is a danger that the space will close before the canine erupts as the buccal teeth drift mesially. Figures 9a–e illustrate such a case where the fitting of a space maintainer proved useful. The  appliance was fitted just prior to the emergence of the permanent canines. The four first premolars were then extracted and the appliance left in position until the canines erupted. This took about 6 months and saved a considerable amount of extra treatment for the patient by allowing spontaneous alignment of the canines. 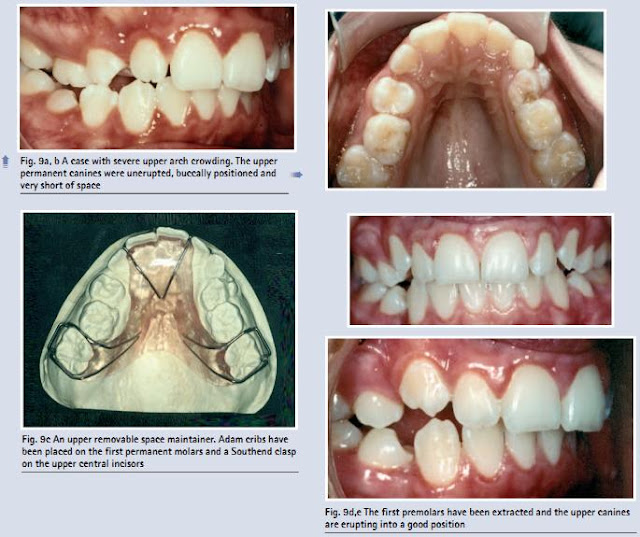 Retention
Many orthodontists use various types of removable appliances to act as retainers, usually at the completion of fixed appliance treatment. Removable retainers are usually held in position with Adams Cribs on the first permanent molars with a labial bow and possible acrylic coverage of the anterior teeth (Fig. 10). 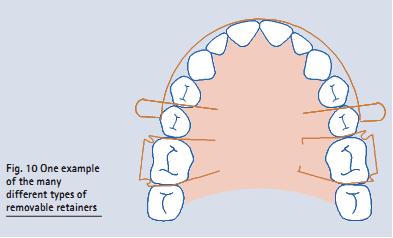 FIXED APPLIANCES
These appliances are attached to the crowns of teeth and allow correction of rotations, bodily movements of teeth and alignment of ectopic teeth. They have increased in sophistication enormously over the past 10–15 years and together with advancements in arch wire technology are capable of producing a very high level of treatment result. Simultaneous multiple tooth movements can be achieved, invariably creating a better treatment outcome than can be achieved with removable appliances. Although there are a variety of fixed appliances available they all operate in a similar way producing a fixed point of attachment to control the position of the teeth. Brackets are attached to the teeth and wires (arch wires) are placed in the bracket slots to move the teeth. The closer the fit of rectangular arch wires in a rectangular slot on the bracket the greater the control of the teeth (Fig 11). As treatment progresses, thicker rectangular wires are used to fully control the teeth in three dimensions. Fixed appliances are the appliances of choice for most orthodontic treatment because the results are far more predictable and of a higher standard achieved than by other means. However, they are relatively complex appliances to use and further training in these devices is essential. An example of a case treated with fixed appliances is shown in Figure 12a–j. The anchorage requirements for the bodily movement of teeth are considerably greater than for tipping movements (Fig. 13). 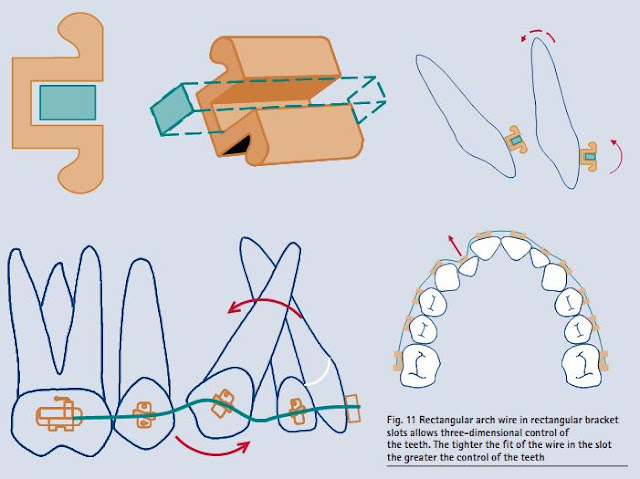 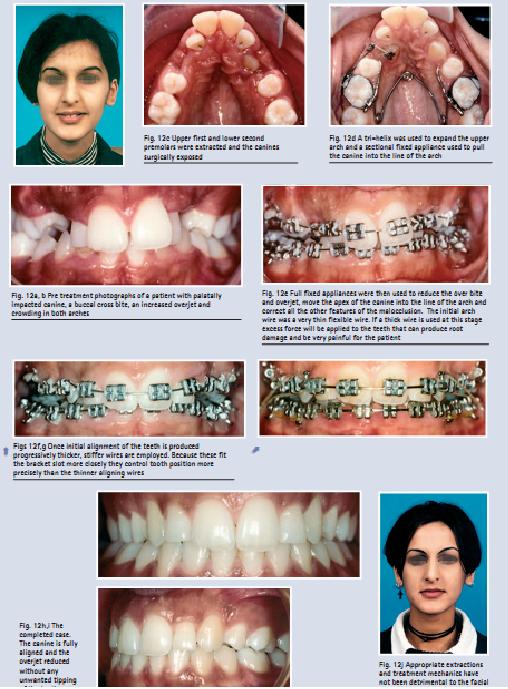 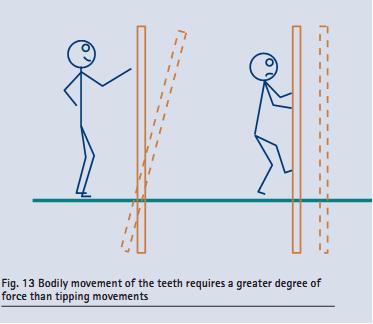 FUNCTIONAL APPLIANCES
These are powerful appliances capable of impressive changes in the position of the teeth. They are generally used for Class II Division I malocclusions although they can be used for the correction of Class II Division II and Class III malocclusions on occasion. They are either removable from the mouth or fixed to the teeth, and work by stimulating the muscles of mastication and soft tissues of the face. This produces a distalising force on the upper dentition and an anterior force on the lower. Whilst they are capable of substantial tooth movement, like all removable appliances they are not capable of precise tooth positioning and cannot deal effectively with rotations or bodily tooth movement.
There is some controversy as to the precise mode of action of functional appliances. Some clinicians feel they have an effect on this facial skeleton, promoting growth of the mandible and/or maxilla. Others feel that the effects are mainly dento-alveolar and that the results achieved are accomplished by tipping the upper and lower teeth. Unfortunately many of the studies relating to functional appliance treatment have been poorly constructed and their conclusions should be treated with caution. A large-scale, prospective, randomized clinical trial currently being undertaken in United Kingdom strongly suggests that 98% of the occlusal correction is by tipping of the teeth with an almost negligible effect on the skeletal pattern. Nevertheless, dramatic occlusal changes are possible with these appliances and they can aid the correction of some quite severe malocclusions. Figures14a–f show a case treated with a function-al appliance that had a marked effect not only on the occlusion but also on the patient's facial appearance. 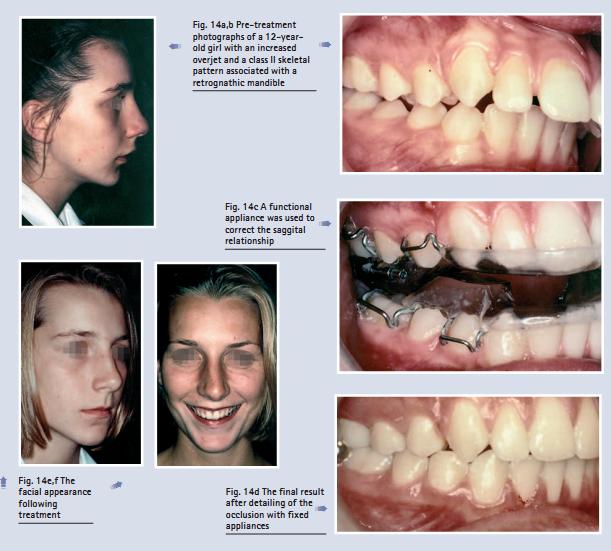 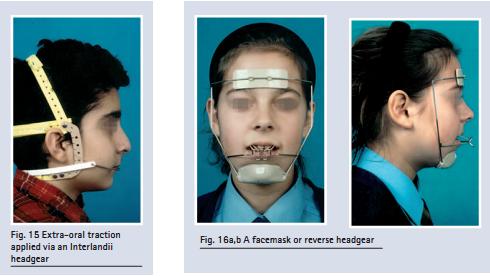 These are headgear devices, chin caps and face masks, which are used to provide an external source of anchorage or traction for teeth in one or both arches. The commonest type is headgear for the distal movement of the buccal teeth. A metal face bow is attached to either a removable or a fixed appliance inside the mouth and elastic traction applied to it. As well as force being applied distally to either the maxilla or the mandible it can be applied mesially via a facemask. This is typically used in Class III cases to correct an anterior cross bite or in cases where the buccal segments are being moved forward to close spaces in the arches. Examples of extra oral traction devices are shown in Figures 15, 16a and b. Chin caps have been used to try and restrain mandibular growth in Class III malocclusions. However, the evidence from the literature suggests that they are not terribly effective and their use has declined in recent years.
see how face mask works
Posted by Upul Cooray at 9:33 PM

Email ThisBlogThis!Share to TwitterShare to FacebookShare to Pinterest
Labels: Orthodontics