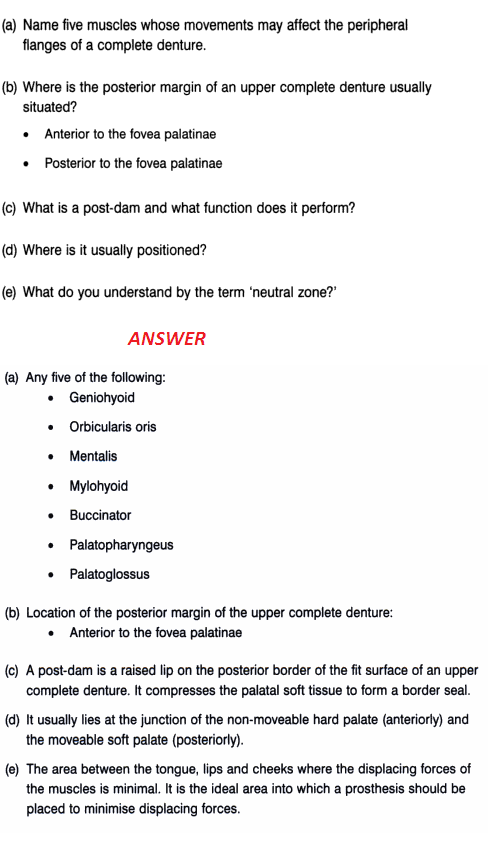 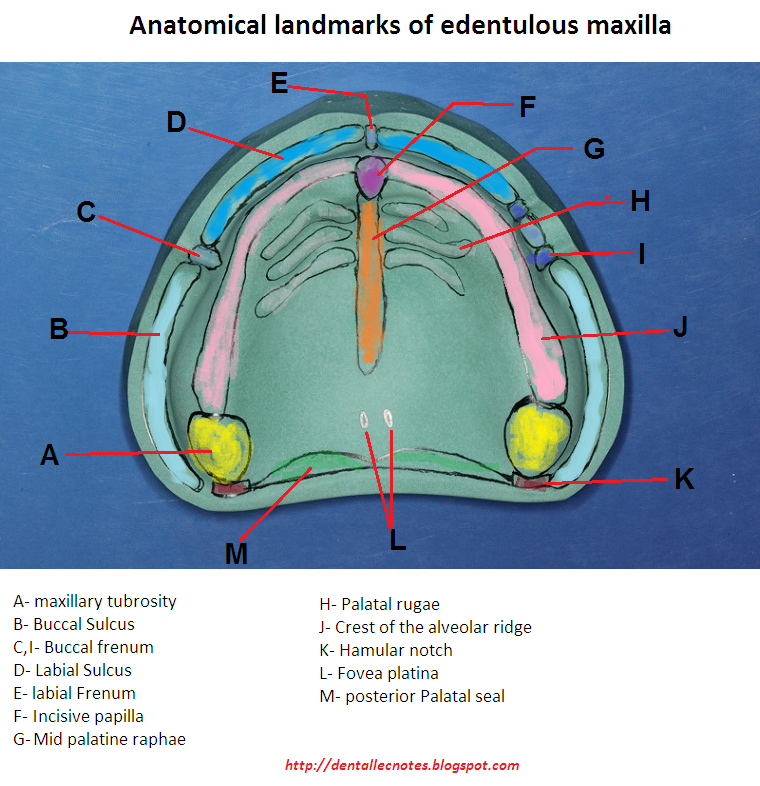 Labial frenum
Single band of fibrous connective tissue, must be properly relieved.
Labial vestibule
Extends from labial frenum to buccal frenum. Proper lip support should be provided.
Buccal frenum
Consist of one or more bands. Must be Relieved
Influenced by 3 muscles-  Orbicularis oris (forward), Buccinator (backward),  Caninus (position)
Buccal vestibule
Buccal frenum to hamular notch
Influenced by Buccinator, Modiolus, Coronid process of mandible
Hamular notch
Pterygomaxillary notch, Distal extension of denture ,Situated between the tuberosity and hamulus of the medial pterygoid plate.
Posterior palatal seal area
the soft tissues along the junction of the hard and soft palates on which pressure within the physiologic limits of the tissues can be applied by a denture to aid in the retention of the denture.
Synonyms: post dam area, postpalatal seal area

Hard palate
Flat areas as secondary retentive areas.
Flat palate (not good support), V shaped palate (least favorable).
Residual ridge
Ridge left after the extraction of teeth. Mucosa is firmly attached to the periosteum of the bone. Consist of dense collagenous fibers.
Considered as a secondary stress-bearing area  because it is subject to resorption contrary to horizontal portion of hard palate.
Palatal rugae
Resist the horizontal forces against the denture, Should not be over  compressed.

Maxillary Tuberosity
The medial & lateral walls resist the horizontal and torquing forces which would move the denture base in lateral or palatal direction.
Therefore, maxillary denture base should cover the tuberosities and fill the hamular notches.

Email ThisBlogThis!Share to TwitterShare to FacebookShare to Pinterest
Labels: MFDS, MJDF, NBDE, Prosthodontics, Q and A