BASIC ENAMEL AND DENTINE STRUCTURE
Sound enamel consists of crystals of hydroxyapatite packed tightly together in an orderly arrangement (the enamel prisms). The crystals are so tightly packed that the enamel has a glass-like appearance and it is translucent, allowing the colour of the dentine to shine through it. Even though crystal packing is very tight, each crystal is actually separated from its neighbours by tiny intercrystalline spaces or pores. These spaces are ﬁlled with water and organic material. When enamel is exposed to acids produced in the microbial bioﬁlm, mineral is removed from the surface of the crystal which shrinks in size. Thus, the intercrystalline spaces enlarge and the tissue becomes more porous. This increase in porosity can be seen clinically as a white spot.
Dentine is a vital tissue permeated by tubules containing the cell processes  of the odontoblasts. This vital tissue defends itself from any assault, such as caries, by tubular sclerosis. This is the deposition of mineral along and within the dentinal tubules resulting in their gradual occlusion. In addition, the odontoblasts form tertiary dentine at the pulp–dentine border in response to the stimulus. Both these reactions are protective because they make the dentine less permeable.
THE FIRST VISIBLE SIGN OF CARIES ON AN ENAMEL SURFACE
The earliest visible sign of enamel caries is the ‘white spot lesion’. To see the white spot lesion the plaque overlying it must be removed with a brush and the tooth thoroughly dried with a three-in-one syringe. This can be done occlusally as well as buccally or lingually.The active lesion is matt and feels rough if a sharp probe is gently drawn across it. 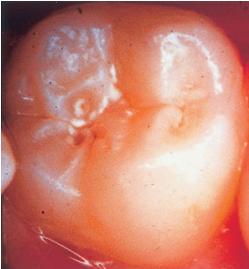 A white spot lesion at the entrance to the ﬁssure on a molar.
What is happening histologically?
A beautiful series of scanning electron microscope (SEM) studies, carried out in orthodontic patients due to have a premolar extracted, showed what was happening at the tooth surface. Bands allowing plaque to accumulate beneath them were put onto teeth. After 4 weeks they were removed and the classic matt, chalky white spots had formed. The SEM pictures showed that after 4 weeks of plaque accumulation there was marked dissolution of surface enamel. This partly explains why the surface is matt. Regular plaque control was now re-established and 3 weeks later the surface was hard and shiny and the white spot less obvious. Now the SEM pictures showed abrasion of the surface: the eroded area had been partly removed.
Appearance of the white spot lesion in polarized light
In following figure  a white spot lesion on a smooth surface has been sectioned longitudinally. The section is in water and viewed in polarized light. The main part of the lesion (the body of the lesion) is seen as a dark area deep to a relatively well mineralized surface zone. The body of the lesion is porous and when the section is in water these pores have a volume in excess of 5%. The surface zone, on the other hand, is only about 1% demineralized. 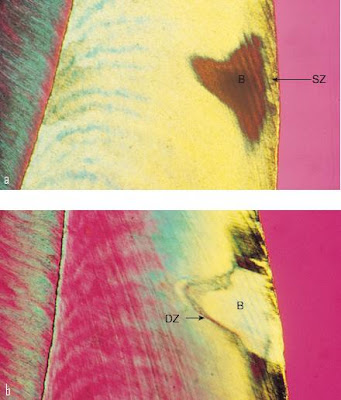 (a) Longitudinal ground section through a small lesion of enamel caries on a smooth surface examined in water with polarized light. The lesion is cone shaped. The body of the lesion (B) appears dark beneath a relatively intact surface zone (SZ). (b) The same section as in (a), now examined in quinoline with the polarizing microscope. A dark zone (DZ) can be seen outlining the lesion. The body (B) of the lesion appears translucent.
If the section is now taken out of water and put into a liquid called quinoline, dark areas now outline the body of the lesion. These are called dark zones and have a pore volume of 2–4%. The areas look dark because there are big holes and little holes in the enamel and quinoline, being a big molecule, cannot get into the little holes which remain ﬁlled with air giving a dark appearance. The body of the lesion, which looked dark in water, now looks translucent because quinoline has the same refractive index as enamel and has entered the porous spaces. 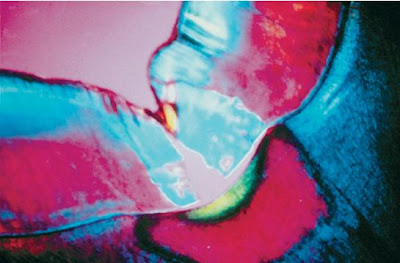 Longitudinal ground section of a natural occlusal carious lesion examined in quinoline in polarized light. The lesion forms in three directions, guided by prism direction assuming the shape of a cone with its base towards the enamel–dentine junction. The undermining shape of this lesion is purely a function of anatomy.
Arrest of lesions
Inactive or arrested white spot lesions have a shiny surface and may be brown in colour, having picked up exogenous stains from the mouth. These lesions cannot be detected by gently drawing a sharp probe across them because they feel the same as normal enamel. Histologically these lesions show wide, well-developed dark zones at the front of the lesion within the body of the lesion and at the surface of the lesion. 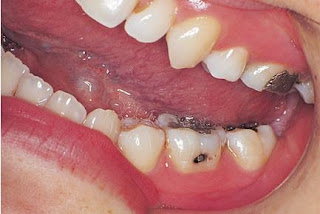 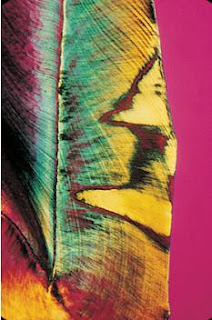 Arrested lesions on the buccal aspect of the lower ﬁrst molar. A small amalgam restoration is also present. These lesions are likely to have formed years earlier at the gingival margin

It is very important to realize that the carious process can be arrested by simple clinical measures such as improved plaque control with a ﬂuoride toothpaste and altered diet. It is therefore the clinician’s responsibility to detect enamel caries in its earliest form by careful visual inspection of teeth after cleaning and drying. The clinician can now help the patient tip the balance in favour of arrest rather than progression of lesions. An arrested white spot is more resistant to acid attack than sound enamel. It may be regarded as scar tissue and should not be attacked with a dental drill. 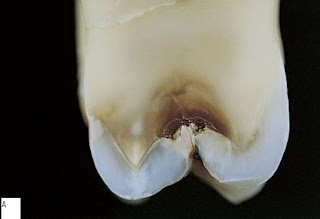 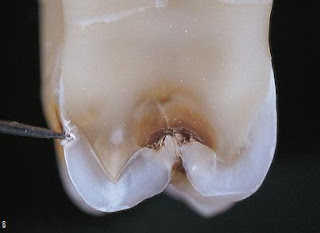 A sharp probe has been jammed into the white spot lesion on the buccal aspect of this extracted molar. (a) shows the lesion before probing and  (b) shows the probe and the resulting damage. On the occlusal surface the enamel lesion has formed on the walls of the ﬁssure and the lesion at the enamel–dentine junction is much under than the lesion the dentist can see at the enamel surface.
Clinical implications of subsurface porosity
Subsurface porous lesions can be damaged by sharp probes which can make holes and encourage the progression of lesions because plaque may now be  difﬁcult to remove. It is however, useful to draw a sharp probe gently across the lesion surface to feel whether it is matt (active) or shiny (arrested) but the probe should not be used as a bayonet!
The white spot lesion is more obvious on a dry tooth, but the lesion visible on the wet tooth is deeper into the tissues than the lesion only visible once the enamel is dry. This is to do with porosity and the relative refractive indices of air, water, and enamel. Enamel has a refractive index of 1.62. When carious,  porous enamel is wet, the spaces are ﬁlled with water, which has a refractive index of 1.33. The difference in refractive index affects the light scattering, and the lesion looks white. If the tooth is now dried, the water is replaced with air, which has a refractive index of 1.0. The difference in refractive index between the air and the enamel is greater than between the water and the enamel. This explains why the lesion looks more obvious, or an earlier lesion can be detected.
The shape of the lesion and its clinical implication
On a smooth surface the lesion is classically triangular in shape. It follows the direction of the enamel prisms and can be thought of as multiple individual lesions each at a different stage of progression. The central traverse, where the lesion is deepest, is the oldest and most advanced part of the lesion where the bioﬁlm is thickest. The shape of the lesion and the activity of the lesion entirely reﬂect the speciﬁc environmental conditions of the overlying bioﬁlm.
Occlusally, purely because of the sloping ﬁssure walls and the direction of the enamel prisms, the lesion assumes an undermining character. This explains why in the more advanced lesion, where there appears to be a small hole in the tooth, something apparently so small on the surface can be so large when entered with a burr. Once a cavity forms on this surface it is rather like a Marmite pot, narrower at the top than at the base. Now the toothbrush cannot reach into the hole to remove the plaque and the lesion is bound to progress. 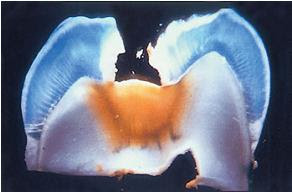 A hemisected occlusal lesion where there is a cavity in the tooth down to the dentine. At this stage the lesion spreads laterally along the enamel-dentine junction. Notice the shape of the cavity. It is wider at the base than at the top. This would prevent the patient cleaning plaque out of the hole.
part II will be posted soon
Posted by Upul Cooray at 10:46 PM