Anterior complete crowns for vital teeth
In  the  anterior  part  of  the  mouth  appearance  is of  overriding  importance,  and  so  the  only  types of  crown  to  be  considered  are  those  with  a tooth-coloured labial or buccal surface. These fall into  three  groups:
• Ceramic  crowns
• Metal–ceramic  crowns
• Other  types  of  crowns.
Ceramic  crowns
In  recent  years  there  have  been  several  developments in the ceramics used for crowns. These can be  classified  as:
• Traditional  fused  porcelain  jacket  crowns(PJCs)
• Pressed  ceramic  crowns
• Milled  ceramic  crowns
• Cast  crowns
• Reinforced  crowns
• Ceramic  resin  bonded  crowns.
Traditional porcelain jacket crowns (PJCs)
This  is  the  oldest  type  of  tooth-coloured  crown and  has  been  in  use  for  more  than  a  century.  It consists  of  a  more  or  less  even  layer  of  porcelain,  usually  between  1  and  2 mm  thick,  covering the  entire  tooth. Following Figures  show  a selection of traditional feldspathic porcelain jacket crowns  in  place.
The  traditional  feldspathic  PJC  is  made  by adapting  a  very  thin  platinum  foil  to  a  die  made from  an  impression  of  the  prepared  tooth. Porcelain  powder,  mixed  with  water  or  a  special fluid,  is  built  onto  the  platinum  foil  and  fired  in the  furnace.  All  PJCs  made  in  this  way  are  now strengthened by having alumina incorporated into the  porcelain  powder.  A  core  of  high-alumina porcelain is fired onto the platinum foil. This high-alumina  core  is  opaque  and  needs  to  be  covered by  more  translucent  porcelain  that  contains  less alumina.
Variations  on  fused  ceramic  crowns  have  been developed  but  most  have  now  been  replaced  by the  systems  described  later.  Examples  of  these strengthened  ceramic  systems  were  Hi-Ceram and  In-Ceram. 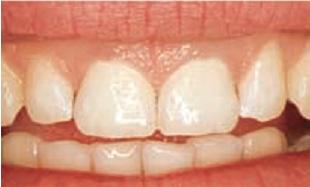 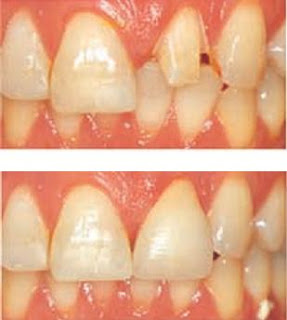 The  upper  left  lateral  incisor  tooth  has  been
moved  orthodontically  into  the  position  of  the  central incisor  and  crowned  with  an  infiltrated,  reinforced system  (Inceram)  to  resemble  the  missing  central incisor
An  alternative  approach  is  to  fire  an  extra-strong  core  of  ceramic  material  to  a  refractory die  and  then  add  further  layers  of  conventional feldspathic  porcelain.  Once  finished,  the  refractory  die  is  grit-blasted  away,  leaving  a  fitting surface  that  is  slightly  rough,  aiding  retention. Both these  systems  can  also  be  used  to  make porcelain  veneers.
Conventional  dental  porcelain  is  physically more  like  glass  than  the  porcelain  used  for domestic  purposes.  It  is  relatively  brittle,  and before  a  PJC  is  cemented  it  can  be  broken  fairly easily.  However,  once  it  is  cemented  and supported  by  the  dentine  of  the  tooth,  the  force required  to  fracture  it  is  of  the  same  order  of magnitude  as  the  force  required  to  fracture  the enamel  of  a  natural  tooth.
However,  traditional  PJCs  do  fracture  and  so the  other  systems  have  all  been  developed  to produce  stronger  all-ceramic  crowns.
Pressed ceramic crowns
There  are  a  number  of  systems  used  to  produce a  strong  ceramic  core  by  pressing  a  ceramic material at high temperature and pressure onto a die  and  then  building  up  layers  of  traditional porcelain  to  create  the  right  contour  and  shade. Examples  of  crowns  made  by  this  process  are shown bellow. 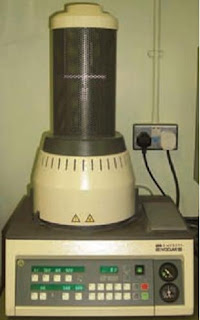 Equipment  for  construction  of  an  Empress  crown

Pressed crowns on the upper and lower incisor teeth
in a patient with mild amelogenesis imperfecta. This can
be seen on the uncrowned teeth, particularly the lower
right  first  premolar.  The  system  used  was  Empress
Laboratory milled cores and crowns
Several  computer  aided  designs/computer  aided manufacture  (CAD-CAM)  have  been  developed and  more  are  in  the  pipeline.  One  example  is  a technique  by  which  the  die  is  scanned  in  a computer  and  the  digital  record  is  sent  electronically  to  a  central  laboratory,  often  in  another country,  where  a  core  is  produced  in  a  strong ceramic  material.  This  is  then  returned  to  the original  laboratory  where  additional  porcelain  is added  to  complete  the  crown.  The system  can also  mill  metal,  in  particular  titanium  (Procera). The computer equipment is shown in Figure 2.2d and  crowns  made  by  this  process  are  shown  in Figure  2.2e  and  f. 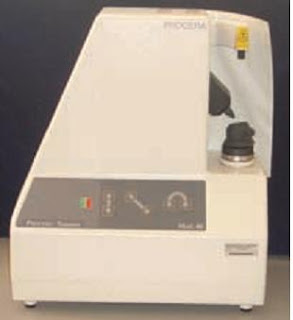 The scanner used in the process of making a Procera
crown 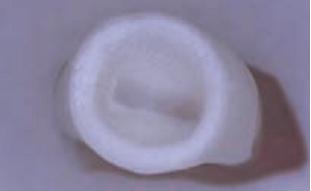 A  Procera  core  of  dense  aluminous  porcelain  ready.The  porcelain  will  be  fired  directly  onto  this. 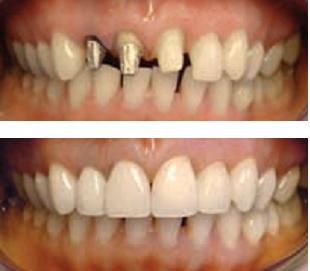 Procera  crowns  restoring  three  incisor  teeth. Note how the crowns disguise the gold post and cores so  the  appearance  is  the  same  as  the  crown  on  the
natural  tooth
Zirconia cores
Porcelain  crowns  can  also  be  manufactured  using complex  laboratory  techniques  with  a  zirconia core  onto  which  conventional  porcelain  is  built. Zirconia  is  an  extremely  strong  material  comparable  to  metal  and  is  dense  white  in  appearance. The conventional porcelain therefore needs to be relatively  thick  for  the  translucent  porcelain  to mask  the  opaque  core  underneath.  Zirconia-based crowns are proposed by the manufacturers for use on posterior as well as anterior teeth due to  their  great  potential  strength,  but  there  is  not yet  sufficient  evidence  that  they  will  survive  for the  long  term  in  high  stress  situations.
Chair-side milled restorations
Chair-side milling  systems  have  been  in  development  for  some  years.  Although  these  systems  do not  yet  produce  reliable  crowns  it  is  anticipated that  they  will  do  so  in  the  foreseeable  future.
Cast ceramic systems
One  of  the  earliest  developments  in  the  1970s was  of  a  system  to  produce  strong  ceramic crowns  by  the  Dicor  process  in  which  a  wax pattern of the crown was made on a conventional die,  invested  and  cast  in  a  glass/ceramic  material. The casting was then placed in a ceramming oven for several hours, during which it went through a crystallization conversion  and  became  much stronger.  At  this  stage  the  casting  had  a  cloudy-clear  appearance  (similar  to  frosted  glass).  It was then stained and characterized using conventional feldspathic  porcelains  in  a  porcelain  furnace. Although the commercially available Dicor system was  developed  by  the  same  company  that  devel-oped  domestic  Pyrex  glassware,  the  manufacturers  state  that  the  material  is  not  the  same  as Pyrex. A number of other castable ceramic or hot transfer-moulded  glass  ceramic  systems  have been  developed. 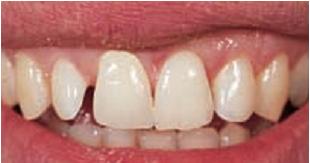 A  cast  ceramic  crown  (Dicor)  on  the  upper  right central  incisor
Reinforced porcelains
One technique is to form an alumina substructure on  a  special  plaster  die  and  following  sintering  in a  furnace  the  porous  substructure  is  coated  with glass  fired  powder  and  further  fired  for  several hours.  This  infiltrates  the  pores  and  eliminates them  as  a  source  of  weakness.  Filling  the  pores also  improves  translucency  and  the  final  appearance when additional porcelain is added.
Thin ceramic resin bonded crowns

Peg-shaped lateral incisors.
The upper right lateral incisor prepared for a resin bonded  ceramic  crown.  The  preparation  is  entirely within  enamel.  The  neck  of  the  tooth  has  been prepared all round with a chamfer finishing line, similar to the preparation for a veneer, and a small amount has been removed from the incisal edge. Nothing has been  removed  from  the  labial  or  proximal  surfaces other than blending them into the gingival finishing line.
Palatal view of the finished crowns.
The labial appearance.
All the previous  crowns  are  usually  cemented  by conventional  means.  However,  a conservative  technique  is  to  prepare  the  tooth within  enamel  exposing  the  minimum  amount  of dentine and then making thin ceramic crowns, no thicker  than  a  porcelain  veneer  but covering the whole tooth. This is then bonded by etching  the  enamel  surface,  grit-blasting  the  fit surface  of  the  crown  and  bonding  with  an adhesive  resin  material. These restorations  are  becoming  more  popular  with some  dentists,  who  believe  that  their  prognosis may be better than ceramic veneers because they go  right  round  the  tooth,  thereby  reducing  the effects  of  the  difference  in  thermal  expansion between  porcelain  and  enamel,  and  also  the  risk of  marginal  leakage  and  staining  is  reduced.
Posted by Upul Cooray at 11:03 PM