A Note On Classification, Diagnosis and Management Of Supernumerary Teeth...... with pdf download

Supernumerary teeth may be encountered by the general dental practitioner as a chance finding on a radiograph or as the cause of an impacted central incisor. They may also be found intraorally following spontaneous eruption. The most common supernumerary tooth which appears in the maxillary midline is called a mesiodens. Treatment depends on the type and position of the supernumerary tooth and on its effect on adjacent teeth.
Definition
A supernumerary tooth is one that is additional to the normal series and can be found in almost any region of the dental arch.
Etiology
The etiology of supernumerary teeth is not completely understood.  Various theories exist for the different types of supernumerary. One theory suggests that the supernumerary tooth is created as a result of a dichotomy of the tooth bud. Another theory, well supported in the literature, is the hyper-activity theory, which suggests that supernumeraries are formed as a result of local, independent, conditioned hyperactivity of the dental lamina. Heredity may also play a role in the occurrence of this anomaly, as supernumeraries are more common in the relatives of affected children than in the general population. However, the anomaly does not follow a simple Mendelian pattern.
Prevalence
In a survey of 2,000 schoolchildren, Brook found that supernumerary teeth were present in 0.8% of primary dentitions and in 2.1% of permanent dentitions. Occurrence may be single or multiple, unilateral or bilateral, erupted or impacted, and in one or both jaws. Multiple supernumerary teeth are rare in individuals with no other associated diseases or syndromes. The conditions commonly associated with an increased prevalence of supernumerary teeth include cleft lip and palate, cleidocranial dysplasia (Fig. 1), and Gardner syndrome. Supernumerary teeth associated with cleft lip and palate result from fragmentation of the dental lamina during cleft formation. The frequency of supernumerary permanent teeth in the cleft area in children with unilateral cleft lip or palate or both was found to be 22.2%.5 The frequency of supernumeraries in patients with cleidocranial dysplasia ranged from 22% in the maxillary incisor region to 5% in the molar region.6 While there is no significant sex distribution in primary supernumerary teeth, males are affected approximately twice as frequently as females in the permanent dentition. 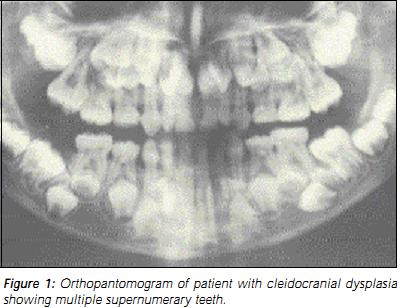 Classification
Supernumerary teeth are classified according to morphology and location (Table 1). In the primary dentition, morphology is usually normal or conical. There is a greater variety of forms presenting in the permanent dentition. Four different morphological types of supernumerary teeth have been described:
• conical
• tuberculate
• supplemental
• odontome

Conical
This small peg-shaped conical tooth is the supernumerary most commonly found in the permanent dentition. It develops with root formation ahead of or at an equivalent stage to that of permanent incisors and usually presents as a mesiodens. It may occasionally be found high and inverted into the palate (Fig. 2) or in a horizontal position. In most cases, however, the long axis of the tooth is normally inclined. The conical supernumerary can result in rotation or displacement of the permanent incisor, but rarely delays eruption. 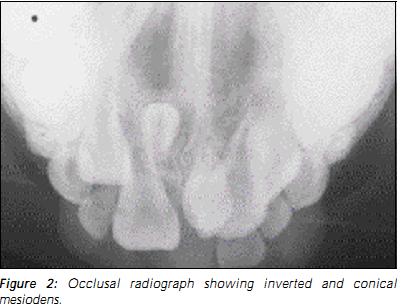 Tuberculate
The tuberculate type of supernumerary possesses more than one cusp or tubercle. It is frequently described as barrel-shaped and may be invaginated. Root formation is delayed compared to that of the permanent incisors. Tuberculate supernumeraries are often paired and are commonly located on the palatal aspect of the central incisors. They rarely erupt and are frequently associ-ated with delayed eruption of the incisors (Figs. 3 and 4). 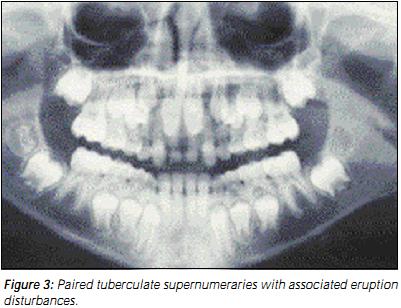 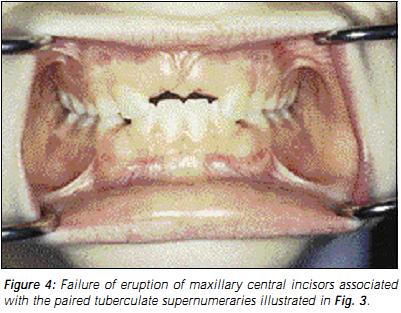 Supplemental
The supplemental supernumerary refers to a duplication of teeth in the normal series and is found at the end of a tooth series (Fig. 5). The most common supplemental tooth is the permanent maxillary lateral incisor, but supplemental premolars and molars also occur. The majority of supernumeraries found in the primary dentition are of the supplemental type and seldom remain impacted. 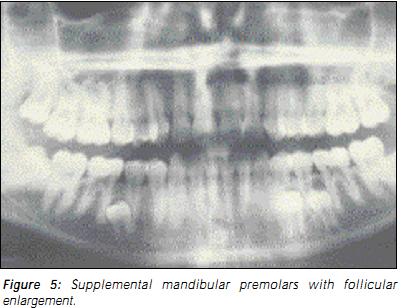 Odontoma
Howard lists odontoma as the fourth category of supernumerary tooth. However, this category is not universally accepted. The term “odontoma” refers to any tumor of odontogenic origin. Most authorities, however, accept the view that the odontoma represents a hamartomatous malformation rather than a neoplasm. The lesion is composed of more than one type of tissue and consequently has been called a composite odontoma. Two separate types have been described: the diffuse mass of dental tissue which is totally disorganized is known as a complex composite odontoma  (Fig.  6), whereas the malformation which bears some superficial anatomical similarity to a normal tooth is referred to as a compound composite odontoma. 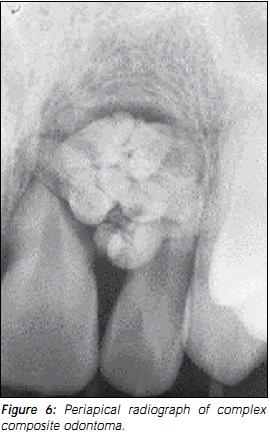 Problems Associated with Supernumerary Teeth
Failure of Eruption
The presence of a supernumerary tooth is the most common cause for the failure of eruption of a maxillary central incisor. It may also cause retention of the primary incisor. The problem is usually noticed with the eruption of the maxillary lat-eral incisors together with the failure of eruption of one or both central incisors (Figs. 3 and  4). Supernumerary teeth in other locations may also cause failure of eruption of adjacent teeth.
Displacement
The presence of a supernumerary tooth may cause displacement of a permanent tooth. The degree of displacement may vary from a mild rotation to complete displacement. Displacement of the crowns of the incisor teeth is a common feature in the majority of cases associated with delayed eruption.
Crowding
Erupted supplemental teeth most often cause crowding. A supplemental lateral incisor may cause crowding in the upper anterior region. The problem may be resolved by extracting the most displaced or deformed tooth.
Pathology 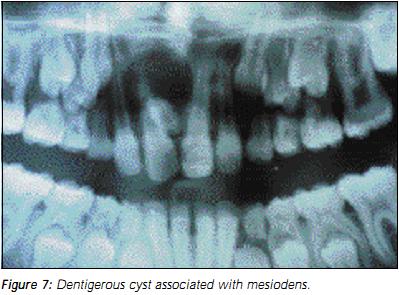 Dentigerous cyst formation is another problem that may be associated with supernumerary teeth (Fig.  7). Primosch reported an enlarged follicular sac in 30% of cases, but histological evidence of cyst formation was found in only 4 to 9% of cases. Resorption of roots adjacent to a supernumerary may occur but it is extremely rare (Fig. 8). 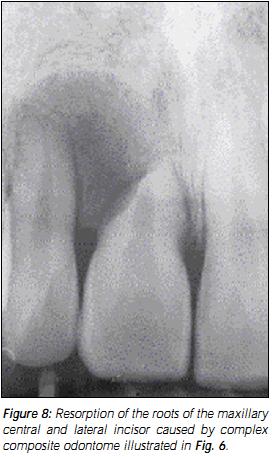 Alveolar Bone Grafting
Supernumerary teeth may compromise secondary alveolar bone grafting in patients with cleft lip and palate. Erupted supernumeraries are usually removed and the socket site allowed to heal prior to bone grafting. Supernumeraries should not be extracted without consultation with the cleft  team. Cooperation between the general dental practitioner and the cleft team is essential. Unerupted supernumeraries in the cleft site are generally removed at the time of bone grafting.
Implant Site Preparation
The presence of an unerupted supernumerary in a potential implant site may compromise implant placement. The supernumerary may require removal prior to implant placement. If removed at the time of implant placement, bone grafting may be required.
Asymptomatic
Occasionally, supernumerary teeth are not associated with any adverse effects and may be detected as a chance finding during radiographic examination.
Radiographic Examination
A radiographic examination is indicated if abnormal clinical signs are found. An anterior occlusal or periapical radiograph is useful to show the incisor region in detail. The bucco-lingual position of unerupted supernumeraries can be determined using the parallax radiographic principle: the horizontal tube shift method utilizes two periapical radiographs taken with different horizontal tube positions, whereas an occlusal film together with a panorex view are routinely used for vertical parallax. If the supernumerary moves in the same direction as the tube shift it lies in a palatal position, but if it moves in the opposite direction then it lies buccally. Intraoral views may give a misleading impression of the depth of the tooth. A true lateral radiograph of the incisor region assists in locating the supernumeraries that are lying deeply in the palate and enables the practitioner to decide whether a buccal rather than a palatal approach should be used to remove them.
Management of Supernumeraries
Treatment depends on the type and position of the supernumerary tooth and on its effect or potential effect on adjacent teeth. The management of a supernumerary tooth should form part of a comprehensive treatment plan and should not be considered in isolation.
Indications for Supernumerary Removal
Removal of the supernumerary tooth is recommended  where:
• central incisor eruption has been delayed or inhibited;
• altered eruption or displacement of central incisors is evident;
• there is associated pathology;
• active orthodontic alignment of an incisor in close proximity to the supernumerary is envisaged;
• its presence would compromise secondary alveolar bone grafting in cleft lip and palate patients;
• the tooth is present in bone designated for implant placement;
• spontaneous eruption of the supernumerary has occurred.
Indications for Monitoring Without Supernumerary Removal
Extraction is not always the treatment of choice for supernumerary teeth. They may be monitored without removal where:
• satisfactory eruption of related teeth has occurred;
• no active orthodontic treatment is envisaged;
• there is no associated pathology;
• removal would prejudice the vitality of the related teeth.
Recommendations Following Supernumerary Removal
Three factors influence the time it takes for an impacted tooth to erupt following removal of the supernumerary:
• the type of supernumerary tooth;
• the distance the unerupted permanent tooth was displaced;
• the space available within the arch for the unerupted tooth.
Removal of a supernumerary tooth preventing permanent tooth eruption usually results in the eruption of the tooth, provided adequate space is available in the arch to accommodate it. Di Biase found 75% of incisors erupted spontaneously after removal of the supernumerary. Eruption occurred on average within  months, provided that the incisor was not too far displaced and that sufficient space was available.
Although the majority of authors recommend exposure of the unerupted tooth when the supernumerary is removed, Di Biase advocates conservative management without exposure.
A lower spontaneous eruption rate of 54% following supernumerary removal was reported by Witsenburg and Boering, who recommend the routine bonding of an attachment and gold chain for orthodontic traction at the time of surgery. However, the time and expense involved in this technique may not be justified if the rates of spontaneous incisor eruption are found to be in the region of 75 to 78%, as reported by both Di Biase and Mitchell and Bennett.
If there is adequate space in the arch for the unerupted incisor following supernumerary removal, space maintenance can be ensured by fitting a simple removable appliance. If the space is inadequate, the adjacent teeth will need to be moved distally to create space for incisor eruption. In that case, the primary canines may need to be extracted at the same time as the supernumerary tooth. Where there is adequate space and the incisor tooth fails to erupt, surgical exposure of the incisor and orthodontic traction is usually required.