Etiology of Periodontal Diseases...A short Note And A PPT Download.

Plaque is the principal etiological factor in most all forms of periodontal disease. Periodontal damage is almost certainly the direct consequence of colonization in the gingival sulcus by organisms within dental plaque. However, the progression from gingivitis to periodontitis is far more complex than this statement suggests, as it involves host defense, the oral environment, the pathogenicity of organisms, and plaque maturity. It is probably easiest to regard periodontal disease as a complex multifactorial infection complicated by the inflammatory response of the host. Various elements of this process are worthy of special note. 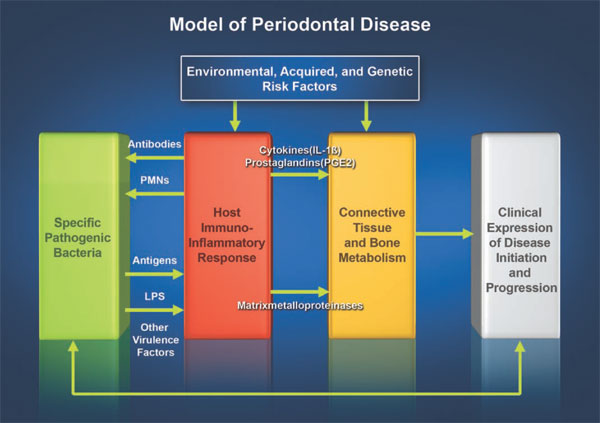 Microbiology
As was reviewed previously, specific bacteria or the interaction of a number of different bacterial species may cause destruction of the periodontal attachment apparatus. The inflammatory response of gingiva to the presence of initial young plaque creates a minute gingival pocket, which serves as an ideal environment for further bacterial colonization, providing all the nutrients required for the growth of numerous fastidious organisms. In addition, there is an extremely low oxygen level within gingival pockets, which favors the development of obligate anaerobes, several of which are closely associated with the progression of periodontal disease. High levels of carbon dioxide favor the establishment of the capnophilic organisms, some of which are associated with localized aggressive periodontitis. However, to date it has not been possible to identify one particular organism or group of microorganisms solely responsible for the initiation and progression of periodontal disease, although the general concepts outlined reflect current working data.
Immunopathology
The inflammatory response to the presence of dental plaque is detectable both clinically and histologically and is responsible for at least some of the periodontal destruction that occurs. Both inflammatory and immunologically mediated pathways contribute to periodontal damage. Antigenic substances released by plaque organisms elicit both cell-mediated and humoral responses, which, while designed to be protective, also cause local tissue damage, usually by complement activation (bystander damage). Non-immune-mediated damage is caused by one or all of the major endogenous mediators of inflammation: vasoactive amines (histamine), plasma proteases (complement), prostaglandins and leukotrienes, lysosomal acid hydrolases, proteases, free radicals, and cytokines.
Host
Local and systemic modifying factors influence progress of the disease.
Local factors are tooth position and morphology, calculus, overhangs and appliances, occlusal trauma, and mucogingival state.
Systemic factors include immune status, stress, endocrine function (e.g., diabetes), smoking, drugs, age, and nutrition. There has been evidence reported suggesting a link between periodontitis, ischemic heart disease, cerebrovascular disease, and preterm low birth weight. It is unclear if this is a cause-and-effect relationship.
Pathogenesis of Periodontal Diseases- An Article