PLAQUE FORMATION
Growth  and  maturation  patterns  of  bacterial  plaque have  been  studied  on  natural hard  oral  surfaces,  such as  enamel  and  dentin,  or  artificial  surfaces,  such  as metal  or  acrylic,  using  light  and  electron  microscopy and  bacterial  culture  (Theilade  &  Theilade  1985).  Despite differences in surface roughness, free energy and charge,  the  most  important  features  of  initial  plaque development  are  similar  on  all  these  materials  (Siegrist et al. 1991).

Stages in the formation of a biofilm on a clean, hard and non-shedding surface following immersion into a fluid environment. Phase 1: Molecular adsorption to condition the biofilm formation. Phase 2: Bacterial adhesion by single organisms. Phase 3: Growth of extracellular matrix production and multiplication of the adhering bacteria. Phase 4: Sequential adsorption of further bacteria to form a more complex and mature biofilm.
The ability to adhere to surfaces is a general property of almost all bacteria. It depends on an intricate, sometimes exquisitely  specific,  series  of  interactions between the surface to be colonized, the microbe and an ambient fluid milieu (Mergenhagen & Rosan 1985). Immediately  upon  immersion  of  a  solid  substratum into the fluid media of the oral cavity, or upon cleaning of a solid  surface  in  the  mouth,  hydrophobic  and macromolecules begin to adsorb to the surface to form a  conditioning  film,  termed  the acquired pellicle. This film is composed of a variety of salivary  glycoproteins  (mucins)  and  antibodies.  The conditioning  film  alters  the  charge  and  free  energy  of the  surface,  which  in  turn  increases  the  efficiency  of bacterial  adhesion.  Bacteria adhere  variably  to  these coated  surfaces.  Some  possess  specific  attachment structures  such  as  extracellular  polymeric  substances and  fimbriae,  which  enable  them  to  attach  rapidly upon contact. Other bacteria require prolonged exposure to bind firmly. Behaviors of bacteria  change  once  they  become  attached  to  surfaces. 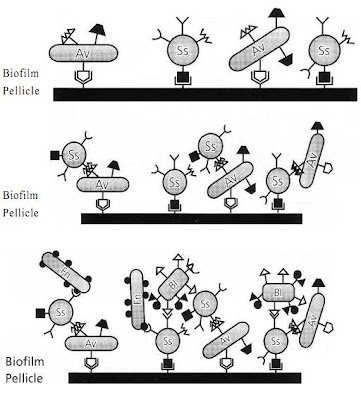 Surface receptors on the Gram-positive facultative cocci and rods allow the subsequent adherence of Gram-negative organisms, which have a poor ability to directly adhere to the pellicle.
Fn: Fusobacterium nucleatum.
BI: Prevotella intermedia. 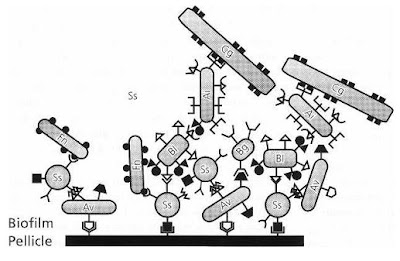 The heterogeneity increases as plaque ages and matures. As a result of ecologic changes, more Gram-negative strictly anaerobic bacteria colonize secondarily and contribute to an increased pathogenicity of the biofilm.


This  includes  active  cellular  growth  of  previously starving  bacteria  and  synthesis  of  new  outer  membrane components. The bacterial mass increases due to continued growth of the adhering organisms, adhesion of new bacteria, and synthesis of extracellular  polymers. With increasing  thickness, diffusion  into  and  out  of  the  biofilm  becomes  more and more difficult. An oxygen gradient develops as a result  of  rapid  utilization  by  the  superficial  bacterial layers  and  poor  diffusion  of  oxygen  through  the biofilm  matrix.  Completely  anaerobic  conditions eventually emerge in the deeper layers of the deposits.
Oxygen  is  an  important  ecologic  determinant  because bacteria  vary  in  their  ability  to  grow  and  multiply  at different  levels  of  oxygen.  Diminishing  gradients  of nutrients  supplied  by  the  aqueous  phase,  i.e.  the  saliva,  are  also  created.  Reverse  gradients  of  fermentation products develop as a result of bacterial metabolism. Dietary  products  dissolved  in  saliva  are  an  important source of nutrients for bacteria in the supragingival  plaque.  Once  a  deepened  periodontal  pocket  is formed, however, the nutritional conditions for bacteria  change  because  the  penetration  of  substances  dissolved in saliva into the pocket is very limited. Within the  deepened  pocket,  the  major  nutritional  source  for bacterial  metabolism  comes  from  the  periodontal  tissues  and  blood.  Many bacteria  found  in  periodontal pockets  produce  hydrolytic  enzymes  with  which  they can break down  complex  macromolecules  from  the host  into  simple  peptides  and  amino  acids.These enzymes  may  be  a  major  factor  in  destructive  processes of periodontal tissues.
Primary  colonization  is  dominated  by  facultatively anaerobic  Gram-positive  cocci.  They adsorb  onto  the pellicle-coated  surfaces  within  a  short  time  after  mechanical  cleaning.  Plaque  collected  after  24  h  consists mainly  of  streptococci;  S.  sanguis is  the  most  prominent of these organisms. In the next phase, Gram-positive rods, which are present in very low numbers initially, gradually  increase  and  eventually  outnumber the  streptococci .  Gram-positive  filaments, particularly  Actinomyces  spp.,  are  the  predominating species in this stage of plaque development. Surface  receptors  on  the  deposited  Gram-positive cocci  and  rods  allow  subsequent  adherence  of  Gram-negative organisms with poor ability to attach directly to pellicle. Veillonella,  fusobacteria and other anaerobic Gram-negative bacteria can attach in this way.  The  heterogeneity  of  plaque  thus  gradually increases  and,  with  time,  includes  large  numbers  of Gram-negative  organisms.  A  complex  array  of interrelated  bacterial  species  is  the  result  of  this development.  Exchange  of  nutrients  between  different species, but also negative interactions, e.g. the production  of  bacteriocins,  play  a  role  in  the  establishment of a stable bacterial community. Due to the influences of local environmental factors, structurally different types  of  plaque  evolve  at  different locations.  Protection  of  the  growing  plaque  from  shear forces  and  local  availability  of  certain  nutrients  are most important. A distinct composition of mature bacterial  deposits  can  eventually  be  recognized  at  specific sites  and  under  specific  clinical  conditions.  Examples are  the  plaque  on  smooth  enamel  surface  versus  fissure  plaque,  or  the  plaque  in  shallow  and  less  shallow gingival crevices.
Accumulation  of  plaque  along  the  gingival  margin leads  to  an  inflammatory  reaction  of  the  soft  tissues. The presence of this inflammation has a profound influence on  the  local  ecology  The  availability  of blood  and  gingival  fluid  components  promotes growth  of  Gram-negative  bacterial  species  with  an increased  periodontopathic  potential.  Bacterial  samples  from  established  gingivitis  lesions  have  increased numbers  of  these  bacteria.  Because  of  the  capability enzymatically to digest proteins, many of these organisms  do  not  depend  upon  a  direct  availability  of  dietary  carbohydrates.  Such  bacteria  do  not  produce  extracellular  polymers  and  develop  only  loosely  adherent plaque in the developing periodontal pocket. Cultivation  of  samples  from  advanced  periodontal  lesions  reveals  a  predominance  of  Gram-negative  anaerobic  rods.  Under  the  microscope,  particularly  high numbers  of  anaerobic  uncultivable  spirochetes  can  be demonstrated.
In  summary,  immediately  following  immersion  of hard,  non-shedding  surfaces  into  the  fluid  environment  of  the  oral  cavity,  adsorption  of  macromolecules will lead to the formation of a biofilrn.  Bacterial adhesion  to  this  glycoprotein  layer  will  first  involve  primary  plaque  formers,  such  as  Gram-positive  facultative  cocci  and  rods.  Subsequent  colonization  onto  receptors  of  these  organisms  will  involve  Gram-negative,  strictly  anaerobic  bacteria,  while  the  primary plaque  formers  also  multiply  to  form  colonies.  The heterogeneity  of  the  complex  biofilm  increases  with time, as the ecologic conditions gradually change.
An Article On Formation of Dental Plaque