LYMPH NODE SWELLINGS
Aetiology
Lymph nodes increase in size and become easily palpable or even visible (Figure 1) in response to a range of disease processes, especially those: 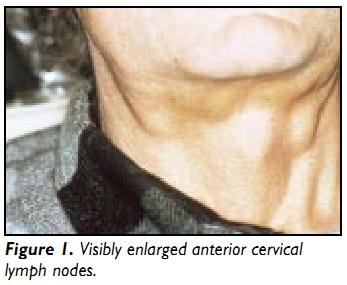 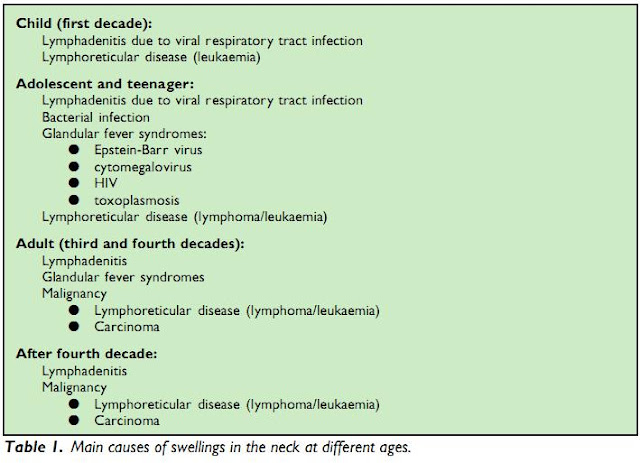 It is not uncommon to find swollen lymph nodes in the neck (cervical lymphadenopathy). The most commoncause of cervical lymphadenopathy is infection in the area of drainage, which
includes virtually any site in the head and neck (Table 2). Lymphadenopathy in the anterior triangle of the neck alone is often due to local disease, usually infection, and a local cause is especially likely if the nodes are enlarged on only one side. Most common of all is an enlarged jugulodigastric (tonsillar) lymph node, inflamed secondary to a viral upper respiratory tract infection.
This sentinel node should always be carefully palpated. 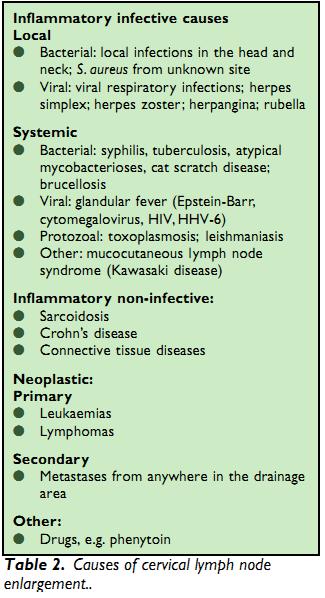 Enlarged cervical lymph nodes may also be a manifestation of systemic infection (e.g. HIV/AIDS), or related to malignant disease in the drainage area (e.g. carcinoma) or elsewhere (e.g.
leukaemia or lymphoma). Bilateral lymphadenopathy may indicate generalized disease. Generalized lymphadenopathy with or without enlargement of other lymphoid tissue such as liver and spleen(hepatosplenomegaly), suggests a systemic cause.
Clinical Features
Lymph nodes that are increasing in size and are tender may be inflammatory. In infective disorders the nodes are usually firm, discrete, tender and mobile.Lymph nodes that are hard or rubbery
may be malignant from metastases from oral or other neoplasms in the head and neck. In the lymphomas, particularly, the nodes may be rubbery, matted together and fixed to deeper structures. Such enlarged nodes are also found as part of generalized lymphadenopathy, in neoplasms such as lymphomas and leukaemias, and in these lymphoproliferative states there is also usually hepatosplenomegaly. It may well be important therefore to obtain a specialist opinion as to whether lymph nodes elsewhere in the body are enlarged.
Diagnosis and Management
Every effort should be made to establish the cause of the lymphadenopathy because lymphadenopathy can usually be adequately treated only by eliminating the underlying cause. The diagnosis is
usually made primarily on the findings from the history and clinical examination but various special investigations may be indicated (these are discussed under the relevant diseases).
However, the cause may not always be found despite a careful search. For example, children occasionally develop a Staphylococcus aureus lymphadenitis (usually in a submandibular node) in the
absence of any obvious portal of infection. More serious is the finding of a malignant enlarged cervical lymph node in the apparent absence of a primary neoplasm. A hidden nasopharyngeal or tonsillar carcinoma is a classic cause of this, and specialist opinion should therefore be sought in such cases.
INFECTIVE INFLAMMATORY CONDITIONS

Toxoplasmosis
This is a rare parasitic infection, contracted mainly from cats.

Toxoplasmosis is caused by a parasite, Toxoplasma gondii, which infests members of the cat family who then excrete it in faeces. T. gondii survives in soil for up to one year, and infection is generally by ingestion of its cysts or oocysts directly from infected soil or present in infected lamb or pork.

In otherwise healthy patients, symptomatic toxoplasmosis manifests with glandular fever syndrome with a negative Paul-Bunnell test, or chorioretinitis and loss of visual acuity. In immunocompromised patients, such as those with HIV, toxoplasmosis is a more serious problem and may be life threatening. Such patients are at particular risk of clinical infection. Many develop CNS involvement.
Transplacental transmission may result in learning disability and other foetal defects.

Toxoplasmosis is diagnosed from the history and examination findings, confirmed by:
Acute Non-specific Bacterial Infections
Any bacterial infection in the area of drainage can cause enlargement of anterior cervical lymph nodes. Most of these infections are non-specific and odontogenic, and there may or may not be fever and malaise. Usually:
However, lesions on the back of the scalp or neck may cause enlargement of posterior cervical nodes.

S. aureus usually infects a single submandibular lymph node in young children to cause acute lymphadenitis in the absence of any detectable entry point
for the organism. Atypical mycobacteria may cause a similar clinical picture and are increasingly seen in immunocompromised persons.

Diagnosis is often empirical, though it may be possible to aspirate the infected gland and identify the causal bacterium. Specialist referral is warranted. The condition should be treated with
antibioticsóusually flucloxacillin for S. aureus because the organism is often penicillinase-producing. Mycobacterial infections are treated with anti-tubercular therapy. If a lesion is fluctuant and pointing, surgical drainage is needed.

This rare bacterial infection is contracted from cats, and usually seen in children.

Aetiology
Cat scratch disease is almost always, but not invariably, acquired from a scratch or close contact with a cat infected with Bartonella (Rochalimaea) quintana, a Gram-negative bacterium.

Diagnosis and Management
The history, together with an intradermal skin test (and occasionally biopsy), facilitate the diagnosis specialist referral may thus be indicated. There is also often a mild leukocytosis and raised
erythrocyte sedimentation rate (or plasma viscosity).
As the condition is self-limiting, no treatment is usually actually needed, apart from supportive care. However, erythromycin is effective and is often indicated if the patient is immunocompromised.


This is an uncommon childhood disease, which may result in cardiac damage and is lethal in up to 10% of patients. The aetiology is unknown but apparently infectious.

The condition manifests with generalized lymphadenopathy, a rash with desquamation of hands and feet, oedematous lips and pharyngitis. It may be complicated by myocarditis.

Diagnosis and Management
There is no specific diagnostic test or treatment. Specialist care is mandatory.

These include sarcoidosis, Crohn's disease and various connective tissue diseases. Cervical lymph nodes may be enlarged in rheumatoid arthritis or lupus erythematosus.

Metastatic Malignancy (Other than Lymphoid) The usual neoplasms that metastasize to cervical lymph nodes are:
Rare metastases to lower cervical nodes include tumours from the stomach and testes.
The usual findings are:
In some patients with a malignant cervical lymph node, the primary tumour is never located. Lymph node and tonsillar biopsy may well be needed to help the diagnosis of malignancy and
sometimes to establish the origin of the tumour.
Posted by Upul Cooray at 11:25 PM