DIABETES MELLITUS
Diabetes  mellitus  is  a  complex  disease  with  varying degrees  of  systemic  and  oral  complications, depending  on  the  extent  of  metabolic  control,  presence  of infection and  underlying  demographic  variables.  This has led to conflicting results in epidemiological studies, with regard to periodontal disease presentation in diabetic patients and their response to treatment.  This section deals with diabetes  and  its  implications  on  the host  response  to  bacterial  plaque,  in  the  context  of clinical  and  laboratory  data  pertaining  to  periodontal disease.
Type 1 and Type 2 diabetes mellitus
Diabetes  mellitus  (DM)  is  categorized  as  Type  1  and Type  2  DM.  Type  1  DM  develops  due  to  impaired production  of  insulin,  while  Type  2  DM  is  caused  by deficient utilization of insulin. Type 1 DM results from destruction of  the  insulin  producing  [3-cells  of  the pancreas.  This  can  occur  when  genetically  predisposed  individuals  succumb  to  an  inducing  event  such as  a  viral  infection  or  other  factors  that  trigger  a  destructive  autoimmune  response. Approximately  10-20%  of  all  diabetics  are  insulin-dependent or Type 1. They usually have a rapid onset of symptoms associated with a deficiency or total lack of insulin  and  the  condition  may  be  difficult  to  control. Nearly 90% are diagnosed before the age of 21years.
Type  2  DM  results  from  insulin  resistance  which also  contributes  to  cardiovascular  and  other  metabolic disturbances. However, insulin production may decrease later in the disease process  and  require  supplementation,  in addition  to  controlling  diet  or  using  oral  hypoglycemic  agents.  The onset  of  symptoms  in  Type  2  DM  is more  gradual  and  less  severe,  usually  presenting  after the age of 40 years.
Clinical symptoms
The  typical  signs  and  symptoms  of  diabetes  are polyuria,  polydipsia,  polyphagia,  pruritus,  weakness and  fatigue. These  features  are  more  pronounced  in Type 1 than in Type 2 DM, and are a result of hyperglycemia. The complications  of  DM  include  retinopathy,  nephropathy,  neuropathy,  macrovascular disease and impaired wound healing. In view of these findings, the treatment of  DM  is  aimed  at  reducing  blood  glucose  levels  to prevent such complications.
There  is  conclusive  evidence  of  the  importance  of glycemic  control  in  the  prevention  of  diabetic  complications.  Patients  regularly  use  blood  glucose  monitors to provide effective feedback for adjustment of insulin dosage  to  meet  individual  requirements. Recent studies have shown significant improvement in reducing complications associated with Type 2 DM  with  controlled  blood  glucose  levels.  In  these  studies  of  over  5000  Type  2  DM patients, the risk of retinopathy and nephropathy was reduced by 25% with effective glycemic control, using sulfonyl  ureas,  metformin  or  insulin.  The  risk  of  developing  hypoglycemia  needs  to  be  monitored  in these  patients  on  intensive  treatment  regimes,  particularly those on insulin.
Oral and periodontal effects
Poorly-controlled diabetic  subjects  may  complain  of diminished  salivary  flow  and  burning  mouth  or tongue. Diabetic subjects on oral hypoglycemic agents may suffer from xerostomia, which could predispose to opportunistic  infections  with  Candida albicans. Candidiasis  has  been  reported  in  patients  with poorly-controlled  diabetes, associated  with  suppressed  free  oxygen  radical release by PMNs and reduced phagocytosis.
There is good evidence to support the concept that there is an association between poorly-controlled diabetes mellitus and periodontitis.

Poorly-controlled Type 1 diabetes mellitus in a young female aged 19 years. (a) Very inflamed and swollen gingival tissues; early attachment loss was present. (b) The same patient after responding to a course of non-surgical periodontal treatment and improved oral hygiene.
Any differences  in  periodontal  health  between  Type  1  DM  and Type 2 DM patients may relate to differences in management of glycemic control, age, duration of disease, utilization  of  dental  care,  periodontal  disease  susceptibility  and  habits  such  as  smoking.  The  Type  1  DM patients  have  an  increased  risk  of  developing  periodontal  disease  with  age,  and  with  the  severity  and duration of their diabetes.
Periodontal  attachment  loss  has  been  found  to  occur  more  frequently  in  moderate  and  poorly-controlled  diabetic  patients,  of  both  Type  1  DM  and  Type  2 DM,  than  in  those  under  good  control. In addition, diabetics with more advanced systemic  complications  present  with  a  greater  frequency and  severity  of  periodontal  disease.  Conversely,  initial  phase  periodontal  treatment comprising  motivation  and  debridement  of  periodontal  pockets  in  Type  2  diabetic  patients  resulted  in improved  metabolic  control  of  diabetes.  Insulin  resistance  can  develop  in  response  to chronic bacterial infection seen in periodontal disease, resulting  in  worse  metabolic  control  in  diabetic  patients.
Probably  the  most  classic  description  of  the  undiagnosed  or  poorly-controlled  diabetic  is  the  patient presenting  with  multiple  periodontal  abscesses,  leading to rapid destruction of periodontal support. 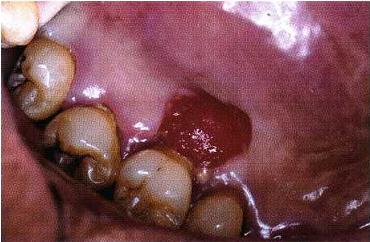 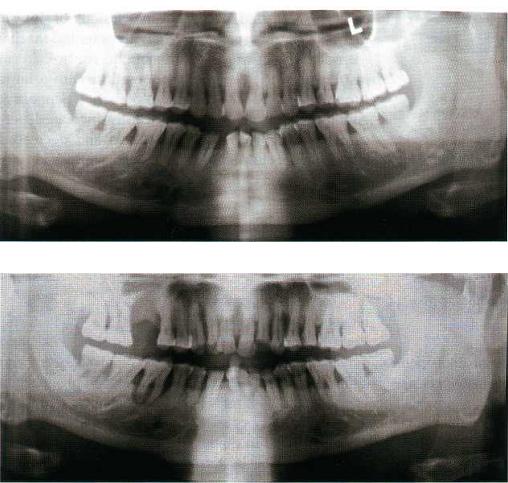 Radiographs of a 50-year-old male who developed Type 2 diabetes mellitus in the period between the two radiographs, which were taken 3 years apart. There has been rapid bone loss and tooth loss associated with recurrent multiple periodontal abscesses.
Harrison et al. (1983) reported a case of deep  neck  infection  of  the  submental,  sublingual  and submandibular  spaces,  secondary  to  periodontal  abscesses involving the mandibular incisors, in a poorly-controlled  diabetic  patient.  In a  population  study  Ueta et  al.  (1993)  demonstrated  that  diabetes  mellitus  was a  predisposing  factor  for  periodontal  and  periapical abscess  formation  due  to  suppression  of  neutrophil function. The effects  on  the  host  response,  and  in  particular  neutrophil  function  may  account  for  this finding (Ueta et al. 1993).

Association of periodontal infection and diabetic control
The  presence  of  acute  infection can  predispose  to  insulin resistance. This can occur  independently  of  a  diabetic  state  and  persist  for up  to  3  weeks  after  resolution  of  the  infection. In a longitudinal study of subjects with  Type  2  DM,  it  was  demonstrated  that  subjects with  severe  periodontal  disease  demonstrated  significantly  worse  control  of  their  diabetic  condition  than those  with  minimal  periodontal  involvement  (Taylor et al. 1996). 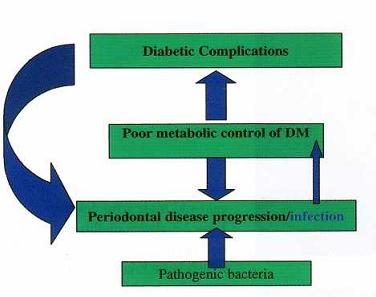 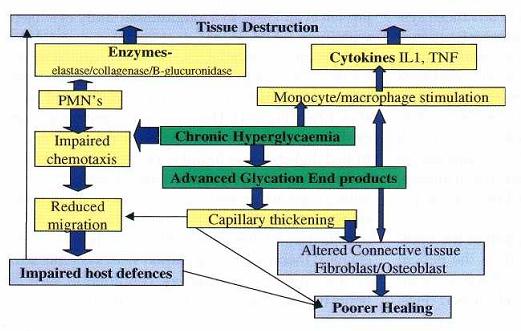 Effect of diabetes mellitus on the host response
The incidence of proteinuria and cardiovascular  complications,  as  a  result  of  uncontrolled  diabetes,  was  found  to  be  significantly  greater in diabetics with severe periodontal disease than those with  gingivitis  or  early  periodontal  disease.  Some  studies  have  shown  that stabilization  of  the  periodontal  condition  with  mechanical  therapy,  in  combination  with  systemic  tetracycline,  improves  the  diabetic  condition  in  such  patients. Reduced insulin dosage in type 1 diabetics following periodontal treatment has also been reported.

Effects on healing and treatment response
Wound  healing  is  impaired  due  to  the  cumulative effects  on  cellular  functions , these factors include:
1. Decreased synthesis of collagen by fibroblasts
2. Increased degradation by collagenase
3. Glycosylation of existing collagen at wound mar-gins
4. Defective remodeling and rapid degradation of newly synthesized, poorly cross-linked collagen.
Periodontal treatment
The  treatment  of  well-controlled  DM  patients  would be  similar  to  that  of  non-diabetic  patients  for  most routine  dental  procedures.  The  short-term  nonsurgical  treatment  response  of  stable  diabetics  has  been found  to  be  similar  to  that  of  non-diabetic  controls, with  similar  trends  in  improved  probing  depths,  attachment  gain  and  altered  sub-gingival  microbiota.  Well-controlled  diabetics  with regular supportive therapy have been shown to maintain  treatment  results  5  years  after  a  combination  of non-surgical  and  surgical  treatment.  However,  a  less  favorable  treatment  outcome may occur in long-term maintenance therapy of poorly-controlled  diabetics,  who  may succumb  to more  rapid  recurrence  of  initially  deep  pockets.
A Video on Effect of Diabetes on Periodontal Disease....
Download an Article on  Diabetes mellitus and periodontal disease
Posted by Upul Cooray at 7:12 PM