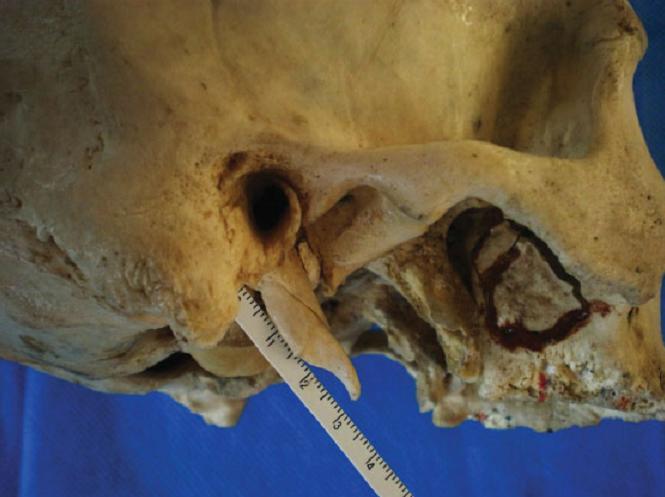 Enlarged styloid process on the right side of a male skull 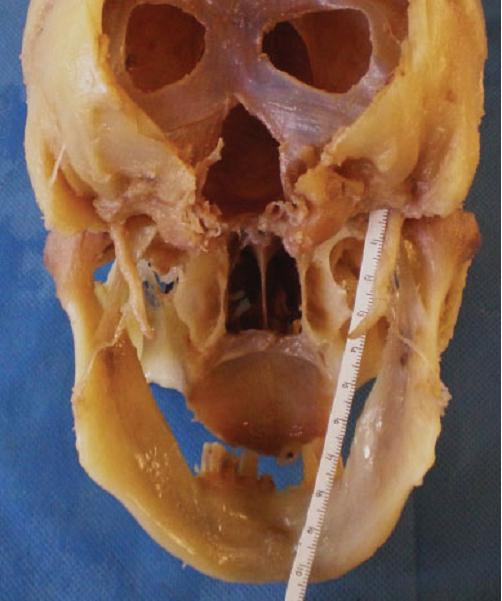 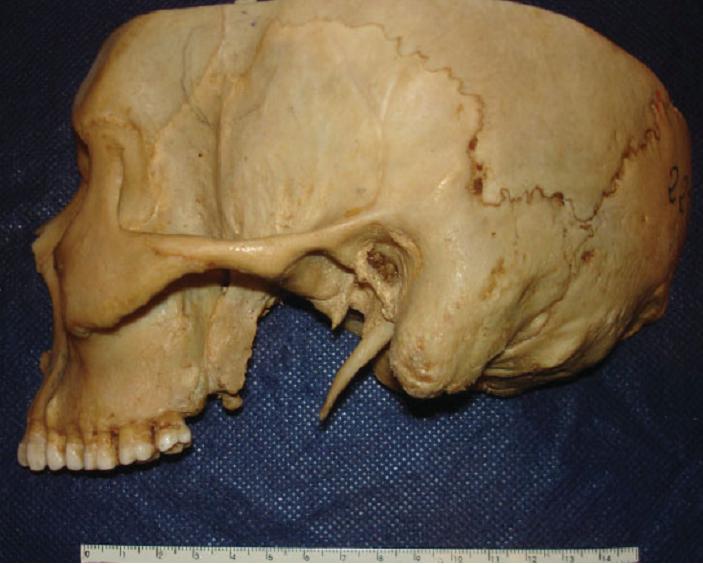 Elongated styloid process on the left side of a male skull (3.9 cm)
A short styloid process may be completely hidden by the vaginal process and an elongated styloid process may reach the hyoid bone.  The related painful syndrome was ﬁrst described in 1870 by Lu¨cke and in 1872, in Vienna. Weinlechner surgically excised the styloid process in order to treat symptoms, however, it was Eagle who provided a comprehensive description of the syndrome for the ﬁrst time in 1937 and identiﬁed two forms of the syndrome (Eagle, 1948, 1949).
Symptoms
Symptoms depend on a variety of factors, including the length and width of the styloid process, the angle and direction of its deviation and the degree of ossiﬁcation. The ﬁrst type, ‘‘classic Eagle’s syndrome,’’ typically occurs in patients after tonsillectomy, although it can also occur after any other type of pharyngeal surgery. A palatable mass may be observed in the tonsillar fossa, its palpation sometimes exacerbating the patient’s symptoms. Symptoms include
ear pain
neck pain extending to the oral cavity and the maxilla
dysphonia
dysphagia
odynophagia
persistent sore throat
the sensation of a foreign body in the pharynx
painful trismus <25 mm,
vertigo and tinnitus
Pain is also observed when turning the head or extending the tongue. Apart from turning the head, yawning can also trigger symptoms, particularly those resembling migraine. Other symptoms may include tongue pain in general, a sensation of increased salivation, alterations in taste, , vocal changes, pain in the upper limbs/chest/TMJ, facial paresthesia, pharyngeal spasm, pain triggered by the movement of the mandible, cough, dizziness, or sinusitis.
Eagle’s syndrome has also been reported as the most important cause of secondary glossopharyngeal neuralgia. All of these symptoms are attributed to the irritation of cranial nerves V, VII, IX or X, all of which are situated very close to the styloid process. 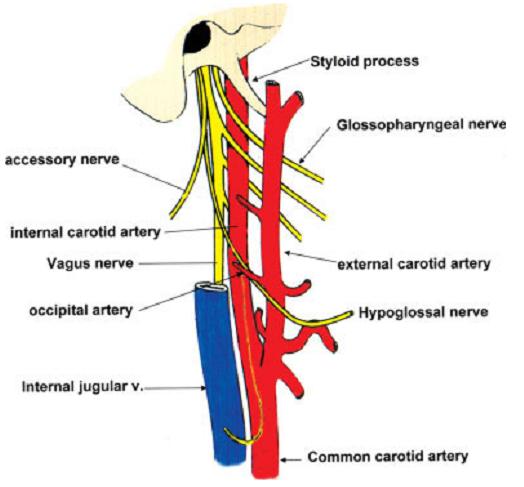 TREATMENT
Eagle’s syndrome can be treated either conservatively or surgically by excising the elongated styloid process. The appropriate treatment is chosen based on the severity of the symptoms and the pathogenesis of the syndrome. It is widely believed, however, that therapy should begin with conservative treatment followed, if necessary, by surgical excision.
Conservative treatment involves injecting steroids or long-lasting anesthetics into the lesser cornu of the hyoid or the inferior aspect of the tonsillar fossa in order to relieve symptoms. Treatment with non-steroidal anti-inﬂammatory drugs is considered adjunctive therapy after surgical treatment for Eagle’s syndrome.
Transpharyngeal manipulation, which involves fracturing the elongated process manually under local anaesthesia, has also been proposed, although long-term results have not been satisfactory. For the surgical excision of the elongated styloid process, two different approaches have been proposed: the extraoral or transcervical and the intraoral or transpharyngeal approach.
Complications related to the surgical excision of the styloid process include facial nerve injury, osteomyelitis and infection at the operative site and in deeper tissues of the head and neck. Other complications include surgical emphysema of the neck, edema of the submandibular and retromandibular areas, thrombosis of the internal carotid artery. Also, reossiﬁcation in the region of the styloid process and stylohyoid ligament may occur and up to 20% of the patients may have a recurrence of symptoms.
DOWNLOAD an article on Egle Syndrome
Posted by Upul Cooray at 6:24 PM