Orofacial pain is the main reason why many patients seek dental advice. This usually has a local cause, mainly the sequelae of dental caries. However, a wide range of diseases, particularly neurological, psychogenic and vascular disorders, can cause orofacial pain. 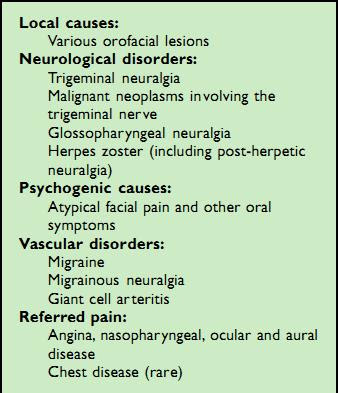 LOCAL CAUSES
Temporomandibular Joint
Pain from the temporomandibular joint may result from dysfunction, acute inflammation, trauma, and, rarely, primary or secondary malignant tumours  or can be referred. It is usually intensified by movement of the mandible; the joint may be tender to palpation via the external auditory meatus. When acutely inflamed, the joint may appear swollen and warm to touch. A splinting protective mechanism by the masticatory muscles may result in muscle spasm, producing secondary pain and trismus.
Salivary Glands
Pain from the salivary glands is localized, may be quite severe and may be intensified by increased saliva production such as occurs before and with meals. The affected gland may be swollen and tender to palpation. In acute parotitis, mouth opening causes severe pain and thus some trismus, and there may be fever and malaise. Salivary flow from the affected gland is usually reduced. In children, the most common cause of salivary pain is mumps. In adults, pain from salivary glands results usually from blockage of a salivary duct by calculus or a mucus plug.
Sinuses and Pharynx
Disease of the paranasal sinuses and nasopharynx can cause orofacial pain. In acute sinusitis a cold is often followed by local pain and tenderness (but not swelling) and radio-opacity of the affected sinuses, sometimes with an obvious fluid level. Pain may be aggravated by change of position of the head. With maxillary sinusitis, pain may be felt in related upper molars, which may be tender to percussion. The pain of ethmoidal or sphenoidal sinusitis is deep in the root of the nose. Tumours can also cause orofacial pain by infiltrating branches of the trigeminal nerve.
Eyes
Disorders of refraction, retrobulbar neuritis or glaucoma can cause pain, which may radiate to the orbit or frontal region.
Ears
Middle-ear disease may cause headaches.
Neck
Neck pain, usually from cervical spondylosis, occasionally causes pain to be referred to the face.
NEUROLOGICAL CAUSES
Sensory innervation of the mouth, face and scalp depends on the trigeminal nerve, and disease affecting this nerve can cause orofacial pain or sensory loss or, indeed, both.
Severe orofacial pain suggestive of trigeminal neuralgia but with physical signs such as facial sensory or motor impairment can result from:
Neuralgia with no Apparent Organic Cause
Such conditions have many names:
idiopathic trigeminal neuralgia, trigeminal neuralgia, benign paroxysmal trigeminal neuralgia, tic doloureux.
Trigeminal neuralgia is the most common neurological cause of orofacial pain. It is, however, rare and seen mainly in middle-aged or older patients.
Aetiology
The cause is unclear, but trigeminal neuralgia may be due to an atherosclerotic blood vessel pressing on the roots of the trigeminal nerve.
Clinical Features
Trigeminal neuralgia has the following main characteristics.
Pain which is:
severe;
of abrupt onset and termination;
electric shock-like, brief, stabbing (lancinating);
unilateral;
restricted to the trigeminal nerve distribution.
The pain usually involves the mandibular and, rarely, the other divisions of the trigeminal nerve.
In some patients the pain is triggered. The trigger site may bear no relation to the painful area, but is always ipsilateral to the pain. Patients do not necessarily recognize the trigger for what it is, and may find that pain is brought on by chewing, talking, swallowing, smiling or temperature changeóusually exposure to cold air.
Pain-free Intervals Between Attacks
This is often an intermittent disease, with apparent remissions for months or years. However, recurrence is common.
Very often the pain spreads to involve a wider area over time and the intervals between episodes tend to shorten.
Lack of Neurological Abnormality
There is no sensory loss in the trigeminal region; nor are other neurological abnormalities present. Neurological assessment is needed because similar pain is secondary to multiple sclerosis, tumours, neurosyphilis, HIV infection and other lesions.
Diagnosis and Management
Patients with trigeminal neuralgia are ideally seen at an early stage by a specialist in order to confirm the diagnosis and initiate treatment (Tables 2 and 3).
Medical treatment, typically using anticonvulsants, is successful for most patients. Carbamazepine (Tegretol) is still the main agent used. It must be given continuously prophylactically for long periods. However, it is not an analgesic and, if given when an attack starts, will not relieve the pain.
Carbamazepine must be used carefully and under strict medical surveillance because it can have a range of adverse effects, particularly affecting balance, blood cells, blood pressure and liver function. Typically, the dose is increased to try to control the pain while at the same time trying to avoid ataxia and other adverse effects. If carbamazepine fails, phenytoin or baclofen or other drugs are occasionally useful.
If medical treatment fails or the adverse drug effects are too pronounced, surgery may be required. Injections of local analgesic will temporarily block the pain. Local cryosurgery to the trigeminal nerve branches involved (cryoanalgesia) can produce analgesia without permanent anaesthesia, but the benefit can usually be measured only in months rather than years.
For intractable cases neurosurgery, such as destruction of the trigeminal ganglion (radiofrequency ganglionolysis) or decompression of the trigeminal nerve, may be required. Unfortunately, pain is exchanged for anaesthesia and risk of damage to the cornea and, occasionally, continuous anaesthesia but with pain (anaesthesia dolorosa).
Glossopharyngeal Neuralgia
Glossopharyngeal neuralgia affecting the throat and ear is much less common than trigeminal neuralgia but the pain is similar, and typically triggered by swallowing or coughing. Occasionally it is secondary to a tumour. Carbamazepine is used but adequate relief of pain can be difficult to obtain.
Herpetic and Post-herpetic Neuralgia
Herpes zoster (shingles) is often preceded and accompanied by neuralgia, and post-herpetic neuralgia can cause a continuous burning pain that may be so intolerable that the patient contemplates suicide. Specialist advice is required. 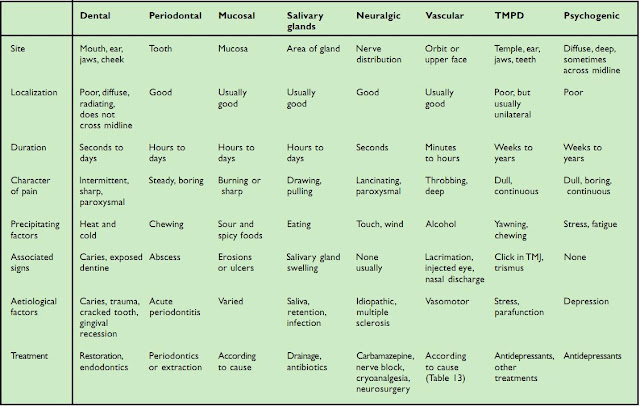