PRINCIPLES OF INSTRUMENTATION IN NON SURGICAL PERIODONDICS
A set of general principles widely recognized in the profession guide the use of instruments in nonsurgical periodontal therapy. The novice clinician follows these principles closely until clinical experience provides the judgment and confidence to modify them for personal preferences or special circumstances, or to achieve a particular outcome. 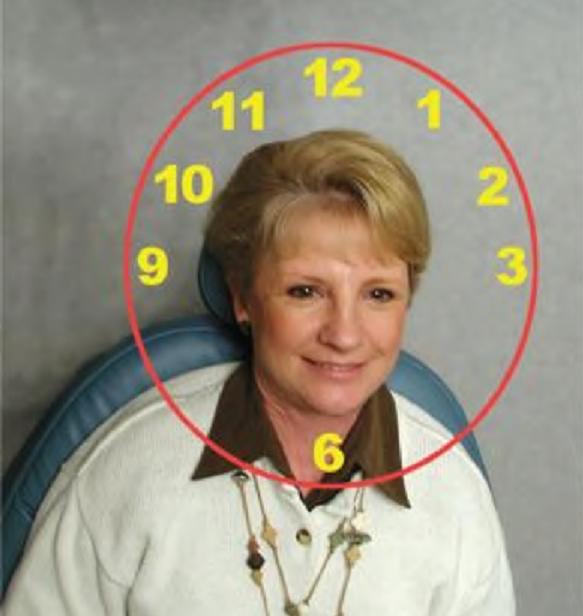 The modified pen grasp is used to hold instruments during most nonsurgical dental procedures. This grasp allows maximum control of the instrument, creates the range of motion for instrumentation, enhances tactile sensitivity, and decreases clinician fatigue. 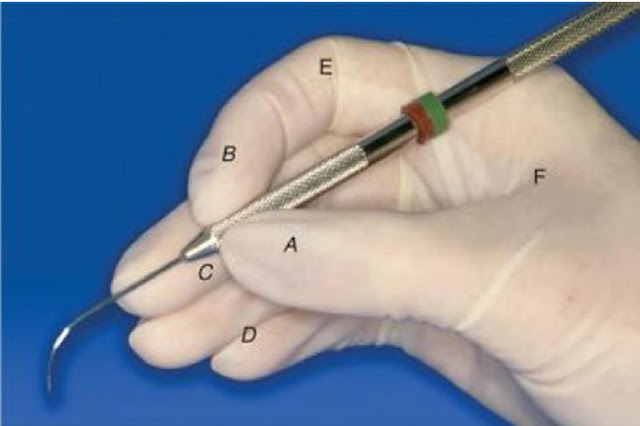 Modified pen grasp. A, Thumb and (B) index finger on the handle close to the junction with the shank. C, Pad of middle finger rests on the shank. D, Ring finger and fourth finger touching, curved, and relaxed. The handle will rest in the region from E to F.

To execute the modified pen grasp, place the index finger (or forefinger) and thumb opposite of each other near the junction of the handle and shank. The index finger and thumb hold the instrument, allowing the clinician to maneuver it around the tooth during instrumentation. Place the middle finger on the shank to stabilize the instrument. The middle finger receives tactile stimuli from the working end during instrumentation. The pads of the fingers should touch the instrument because this region has the most nerve receptors. The third or ring finger supports the hand during procedures. Although the fourth finger serves no function in the grasp, all four fingers touch so that the hand functions as a unit during instrumentation. The instrument handle rests in the region between the second joint of the forefinger and the "V" formed by the thumb and index finger. Finally, the fingers stay curved and relaxed to expand the range of motion, increase tactile sensitivity, and prevent clinician fatigue.
A scaling instrument operates as a lever, with the third finger (the ring finger) serving as a fulcrum and as a stabilizing point for the hand. A fulcrum is the point on which the lever pivots. In periodontal instrumentation, the fulcrum allows the instrument to function. The work of the instrument is cleaving or prying deposits from the tooth surface. Furthermore, the fulcrum provides stability and control of the instrument to prevent injury or trauma to the surrounding tissues and to assure the patient of the clinician's steadiness.
The ideal location for the fulcrum is on the dentition, which is an intraoral fulcrum. The third finger (ring finger) during periodontal instrumentation serves as both a rest for the hand and a fulcrum for the instrument. A clinician attains the greatest stability by placing the fulcrum close to the working area, generally on the same arch and in the same quadrant. A fulcrum established on an occlusal or incisal surface or in the embrasure gives better control than one placed on a flat tooth surface, which can be slippery. Avoid placing a fulcrum on mobile or prosthetic teeth because little security is provided and the pressure may cause discomfort to the patient. The instrumentation hand position for maxillary teeth that allows the clinician to pivot on the fulcrum is sometimes described as "palm up," with the palm of the hand facing the occlusal plane. In contrast, turn the hand "palm down" to instrument mandibular teeth.
An extraoral fulcrum may be necessary or desirable in some situations—for example, missing or mobile teeth, temporomandibular joint disorder, or a patient's limited ability to open. To apply an extraoral fulcrum as shown in following figure, use either the palm or back of the hand rather than a single point to reduce the pressure on the patient's soft tissue. When using an extraoral fulcrum, the clinician should concentrate on moving the hand as a unit.

A substitute fulcrum is another option when encountering difficulty with an intraoral fulcrum. As shown in following figure, the index finger of the nonoperating hand is placed either in the vestibule near the treatment area or on the occlusal surfaces of adjacent teeth. The fulcrum is then established on that finger, rather than on the dentition. Leverage is usually better with a substitute fulcrum compared with an extraoral fulcrum because the distance from the pivot to the working end is shorter.

Once the clinician masters the concepts of the modified pen grasp and the fulcrum, the remaining principles of instrumentation pertain to applying the working end of the instrument to the individual tooth surface. To begin with, the correct end of the instrument must be identified. Figure illustrates that the clinician recognizes the correct end by holding the instrument with the toe pointed into the interproximal and looking for parallelism of the terminal shank and the proximal surface. When the wrong end is chosen, the terminal shank will be perpendicular to the proximal surface.

Adaptation refers to the relation of the working end to the tooth surface. The primary goal of adaptation is to keep the instrument tip in continuous contact with the surface during each successive instrument stroke. To accomplish this, the tip must be adapted to the varying contours of each surface, as well as to periodontal structures, by rolling the handle between the index finger and thumb. The instrument tip must be in continual contact with the tooth surface around the circumference of the tooth. Each stroke overlaps the previous one to ensure complete coverage of the surface. If the instrument is not adequately rolled around the line angle, the tip projects away from the root surface and into the gingival tissue, causing trauma. An improperly adapted tip may cause the clinician to miss deposits on the root surface, especially in any root depressions or grooves.
Knowledge of dental anatomy, particularly root anatomy, is essential to proper instrument adaptation. Longitudinal depressions are common on proximal root surfaces. The furcations of multirooted teeth and the depressions leading from the cementoenamel junction to the furca are among the most difficult areas to instrument. Following figure, which shows a curette adapted to a proximal root surface of a premolar, demonstrates the challenge posed in these procedures. When the tip is not visible during subgingival instrumentation, the clinician uses the position of the terminal shank as a visual cue to judge the working end. 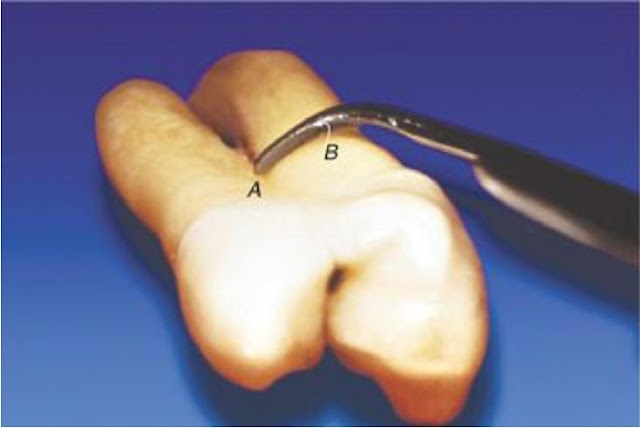 Curette adapted to root surface. A, Furcations and depressions of multirooted teeth are some of the most difficult areas to instrument. B, Angulation, the relation of the face of the blade to the tooth surface, in this case, is approximately 60 degrees. 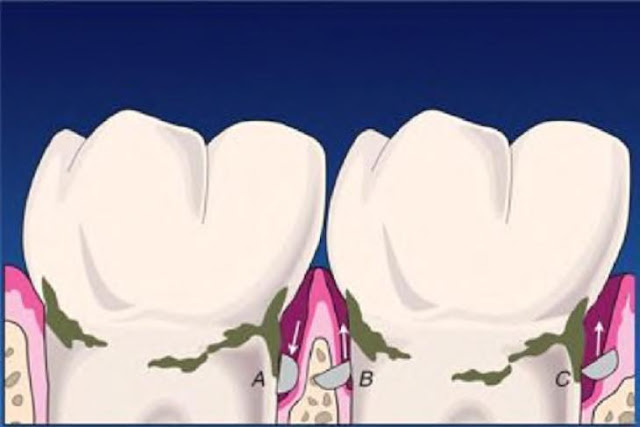 Angulation. The angle of the face of the instrument to the tooth surface is either (A) closed, nearing 0 degree; (B) open, greater than 90 degrees; or (C) working, more than 45 degrees but less than 90 degrees. 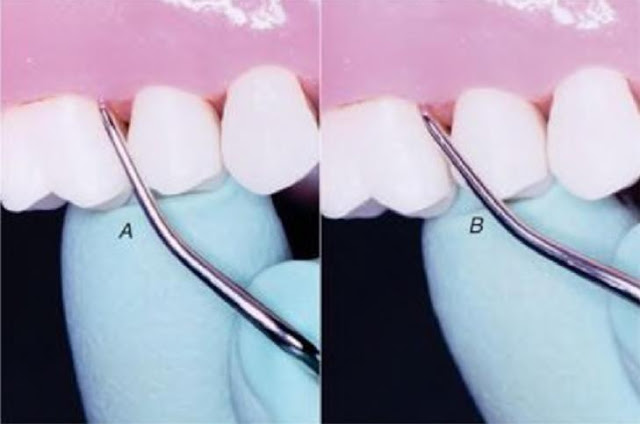 Activation is the motion of the hand pivoting on the fulcrum that produces an instrument stroke. The clinician activates an instrument with wrist-arm motions that roll from the fulcrum finger. Rotary wrist motion involves rotating the forearm to turn the instrument on the fulcrum in much the same way as one turns a doorknob. Wrist flexion is movement of the hand at the wrist as done in waving or painting with a brush. Fingers alone are not used to activate the instrument stroke because finger movements use smaller, less powerful muscles, produce a limited range of motion, and do not engage the fulcrum. 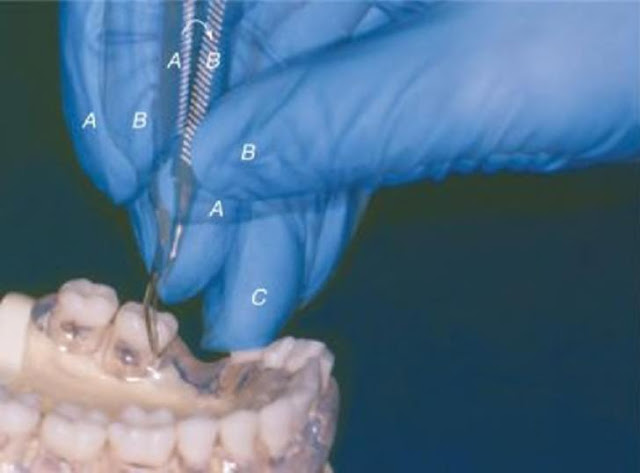 Activation of an instrument. A, Hand and instrument position at the beginning of a stroke and (B) as the stroke is completed. The instrument is activated with wrist-forearm rotation pivoting on the (C) fulcrum. Note that the position of fingers in the grasp does not change because no finger motion is used.

The pressure exerted against the fulcrum is a critical component of activation. If too little pressure is used, leverage is compromised. Use of heavy pressure results in patient discomfort and clinician fatigue. The clinician generally applies moderate pressure on the fulcrum during activation, adjusting it as needed according to the treatment.
The stroke is the single movement in one direction of an instrument that carries out the function of the instrument. During the stroke, force is transmitted to the working end from pivoting on the fulcrum, which is referred to as lateral pressure. The clinician modifies lateral pressure according to the procedure. Short, forceful strokes are used to cleave a ledge or larger deposit of calculus. Removal of softer calculus or stain requires less force and slightly longer strokes. Root planing strokes use significantly less lateral pressure to minimize the amount of root structure removed.
Instrument strokes are defined and described in several other ways. Instrument strokes classified by task or function are exploratory, scaling and root planing. An exploratory stroke is movement of an instrument for detection of deposits or identification of structures. This examining or feeling stroke uses a light grasp and light lateral pressure so that vibrations and other tactile stimuli are transmitted from the working end to the fingers. Scaling is the removal of plaque, calculus, and stain from crown and root surfaces of teeth. A scaling stroke uses a firm grasp and moderate to moderately heavy lateral pressure, depending on the extent of calculus. Root planing is removal of plaque, residual calculus, and contaminated surface root structure until the tooth surface is compatible with gingival health. Root planing strokes use decreasing lateral pressure and increasing stroke length as the surface becomes smoother.
The direction of instrument stroke is designated by relation to the long axis of the tooth. Following figure shows vertical, oblique, horizontal, and circumferential strokes. Horizontal strokes are directed toward tissue and are reserved for procedures using light pressure or maximum control of the instrument. Scaling, which involves greater lateral pressure, usually uses vertical and oblique strokes. Instrument strokes also may be described as pull, push, and walking. A pull stroke moves the instrument coronally away from the gingiva. Push strokes, which move the instrument apically toward the gingiva, are rarely used in periodontal procedures because of the risk for soft tissue injury. A walking stroke  moves the instrument in both directions with little distance between each stroke. Typically, a clinician uses a walking stroke with the periodontal probe and the explorer. 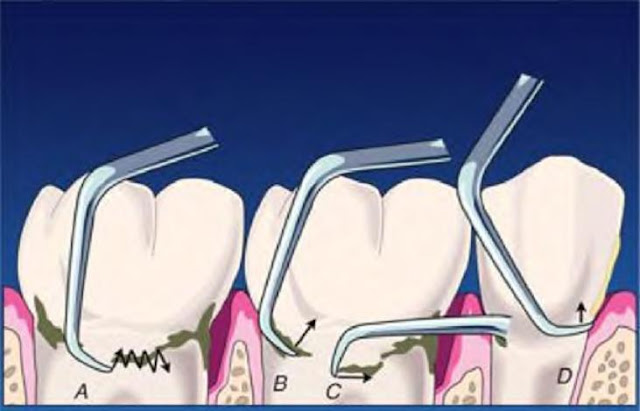 Each stroke during instrumentation should overlap the previous one to ensure that no portion of the tooth surface is missed. Moreover, effective instrument strokes must cover the tooth surface completely from the junctional epithelium to the gingival margin. For this reason, insertion is another important element of adaptation. The goal of insertion is to ensure that the instrument tip reaches the most apical portion of the sulcus or periodontal pocket. To reach the base of the pocket, the toe of the instrument is inserted first and then lightly pushed toward the bottom of the pocket until contact with soft tissue. Proper insertion is often described as "leading with the tip" because of this process. Another way to describe insertion is by orientation of the tip in relation to the apex of the tooth. Correct tip position is designated as apically directed—that is, the instrument tip is angled slightly toward the base of the pocket. Incorrect tip direction allows the back of the instrument to touch the junctional epithelium first, with the instrument tip pointed up and away from the base of the pocket, which transmits the same sensation of reaching a tissue barrier to the grasp fingers. With the working end under the free gingiva, the clinician must rely on visual cues from the terminal shank to determine the orientation of the tip. The terminal shank is parallel with the long axis of the tooth when the instrument tip is accurately positioned. Figure also demonstrates the importance of tip position in detection and removal of calculus. Proper tip direction is critical for complete deposit removal.