A note on Obturator prostheses for hemimaxillectomy patients


Introduction
Probably the most common of all intraoral defects are in the maxilla, in the form of an opening into the antrum and nasopharynx. Defects in the maxilla may be divided into these defects resulting from congenital malformations and the acquired defects resulting from surgery for oral neoplasms. This note considers the rehabilitation of acquired defects of the palate which are the result of trauma, disease, pathological changes, radiation burns, or surgical intervention. The opening produced may be quite small or it may include any portion of the hard and soft palate, the alveolar ridges, and the floor of the nasal cavity.Post-surgical maxillary defects predispose the patient to hypernasal speech, fluid leakage into the nasal cavity, and impaired masticator function.
In the total rehabilitation of the maxillectomy patient, the maxillofacial-prosthodontist has two primary objectives:
• To restore the functions of mastication, deglutition,and speech.
• To achieve normal oro-facial appearance.

The prostheses needed to repair the defect is termed as a maxillary obturator. An obturator (Latin: obturare, to stop up) is a disc or plate, natural or artificial, which closes an opening or defect of the maxilla as a result of a cleft palate or partial or total removal of the maxilla for a tumour mass. The goals of prosthetic rehabilitation for total and partial maxillectomy patients include,

• separation of oral and nasal cavities to allow adequate deglutition and articulation
• possible support of the orbital contents to prevent enophthalmos and   diplopia
• support of the soft tissue to restore the midfacial contour
• and an acceptable aesthetic results.


The indications for the use of an obturator:
An obturator may be used
• To act as a framework over which tissues may be shaped by the surgeon.
• To serve as a temporary prosthesis during the period of surgical correction.
• To restore a patient's cosmetic appearance rapidly for social contacts.
• When surgical primary closure is contra-indicated.
• When the patient's age contraindicates surgery.
• When the size and extent of the deformity contra-indicates surgery.
• When the local avascular condition of the tissues contraindicates surgery.
When the patient is susceptible to recurrence of the original lesion which produced the deformity .

The obturator fulfils many functions:

• For feeding purposes, it may be used to keep the wound or defective area clean, and may enhance the healing of traumatic or post-surgical defects
• It may help to reshape and reconstruct the palatal contour and/or soft palate
• It improves speech or, in some instances makes speech possible
• In the important area of esthetics, the obturator can be used to correct lip and cheek contour
• It can benefit the morale of patients with maxillary defects
• When deglutition and mastication are impaired, it can be used to improve function
• It reduces the flow of exudates into the mouth
• The obturator may be used as a stent to hold dressings or packs post-surgically in maxillary resections. It reduces the possibility of post-operative haemorrhage, and maintains pressure either directly or indirectly on split-thickness skin grafts, thus causing close adaptation of the graft to the wound which prevents the formation of a haematoma and ultimate failure of the graft.


Obturators for acquired defects of palate
Almost all acquired palatal defects are precipitated by resection of neoplasms of the palate and paranasal sinuses. The extent of the resection is dependent on the size, location, and potential behaviour of the tumour.
Prosthodontic therapy for patients with acquired surgical defects of maxilla can be divided into three phases of treatment with each phase having different objectives.


The surgical obturator
It is a base plate type appliance which is constructed from the pre-operative impression cast and inserted at the time of resection of the maxilla in the operating room.


The advantages of surgical obturation are as follows:

There are several principles relative to the design of surgical obturators


The temporary obturator
The temporary obturator is constructed from the post-surgical impression cast which has a false palate and false ridge and generally has no teeth. The closed bulb extending into the defect area is hollow. The patient is usually seen every 2 weeks because of the rapid soft tissue changes that occur within the defect during organization and healing of the wound. The new lining material is placed or changed. It is best to remove all of the old interim lining material because of porosity, leading to bacterial contamination and precipitation of undesirable odours and mucosal irritations.
A definitive obturator is not indicated until the surgical site is healed and dimensionally stable and the patient is prepared physically and emotionally for the restorative care that may be necessary.
There are several reasons for constructing a new obturator. First, the periodic addition of interim lining material increases the bulk and weight of the obturator and this temporary material may become rough and unhygienic. Secondly, if teeth are included in the resection, the addition of anterior denture teeth to the obturator can be of great psychological benefit to the patient. Thirdly, if retention and stability are inadequate, occlusal contact on the defect side may result in improvement of these aspects. 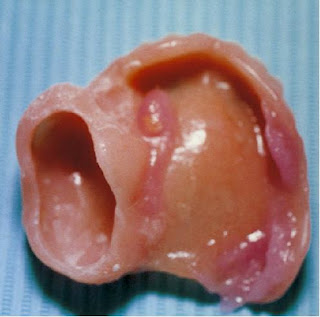 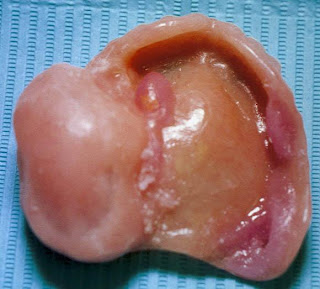 Approximately 6 months after surgery consideration may be given to the construction of a definitive obturator prostheses. It is constructed from the post-surgical maxillary cast. This obturator has a false palate, false ridge, teeth and closed bulb which is hollow. Often the temporary obturator will need to function comfortably for as long as 6 months. The timing will vary depending on the size of the defect, the progress of healing the prognosis for tumor control, the effectiveness of the present obturator, and the presence or absence of teeth. Changes associated with healing and remodeling will continue to occur in the border areas of the defect for at least 1 year. Dimensional changes are primarily related to the peripheral soft tissues rather than to bony support areas.
To reduce and improve adhesion and retention, a hollow obturator bulb is required for cleft palate prostheses and for dentures following maxillectomies.


The advantages of a hollow bulb obturator


Numerous articles appear in the literature describing techniques for the fabrication of hollow obturators to decrease the weight of the prostheses and to make comfortable and well-tolareted prostheses . The construction of the definitive obturator will vary with the type of resection and the presence or absence of teeth. If the obturator is not properly designed and constructed, the stress on the remaining hard and soft tissues may be pathological and may lead to premature loss of abutment teeth and chronic irritation of soft tissues.
Movement of the obturator prostheses
The obturator may be displaced superiorly with the stress of mastication and will tend to drop without occlusal contact. The degree of movement will vary with the number and position of teeth that are available for retention, the size and configuration of the defect, the amount and contour of the remaining palatal shelf, height of the residual alveolar ridge, the size, contour, and lining mucosa of the defect and the availability of undercuts. Lack of retention, stability and support are common prosthodontic treatment problems for patients who have had a maxillectomy.
…….. Download pdf…….
Posted by Upul Cooray at 11:03 PM