In the human embryo, the stomodeum or primitive mouth cavity, a shallow depression lined with ectoderm, is separated from the cephalic end of the pharyngeal gut by the buccopharyngeal membrane, which ruptures during the fourth week of gestation. 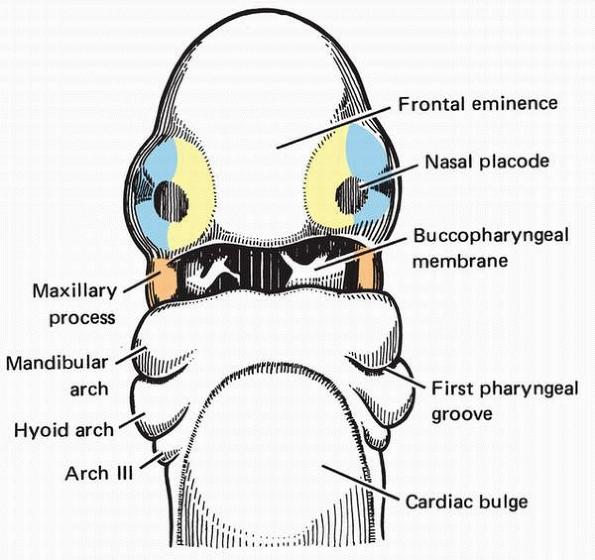 Frontal view of an embryo at 4 to 5 weeks of age. Observe the branchial arch formation and the ruptured buccopharyngeal membrane.
Just anterior to the buccopharyngeal membrane, a midline diverticulum known as the Rathke pouch develops in the oral ectoderm of the roof of the primitive oral cavity. This evaginating pouch comes in contact with a pouch developing from the floor of the diencephalon. Further development of these two opposed structures gives rise to the pituitary gland.
During the fourth and fifth weeks of gestation, as the buccopharyngeal membrane is degenerating, communication is established between the future oral cavity and the pharynx. Concomitant with this event, out-pouchings of the pharyngeal gut develop just posterior to the ruptured buccopharyngeal membrane, forming five pairs of pharyngeal pouches that invade the mesenchyme laterally. Although it was once thought that the neural crest cells of the pharyngeal arches were responsible for patterning skeletal components of the arches, it is now clear that the endodermal lining of the pharyngeal pouches regulates this patterning.
Concurrent with the formation of the pouches in the pharyngeal wall, four pairs of grooves develop around the stomodeal neck area on the lateral surface of the embryo. These pharyngeal grooves (branchial grooves) invade the underlying mesenchyme approximating, but not contacting, their corresponding pharyngeal pouches. Invasion by the pouches and the grooves produces a condensation of mesenchymal tissue interposed between successive pairs of pouches and grooves (clefts). These five bars of condensed mesenchymal tissue are the pharyngeal (branchial) arches (see Figs. 5-2, 5-3A, 5-3B, 5-3C, and 5-4). 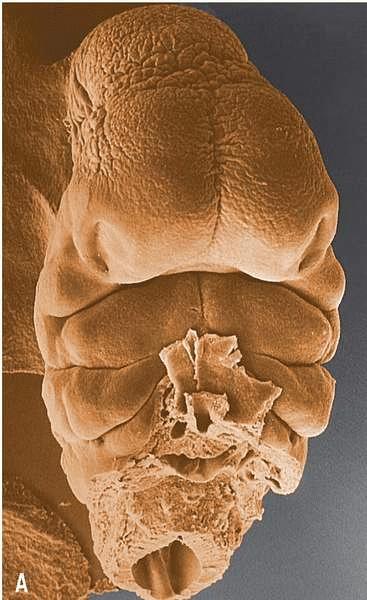 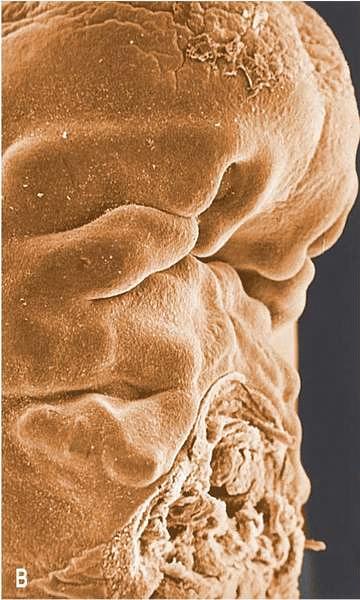 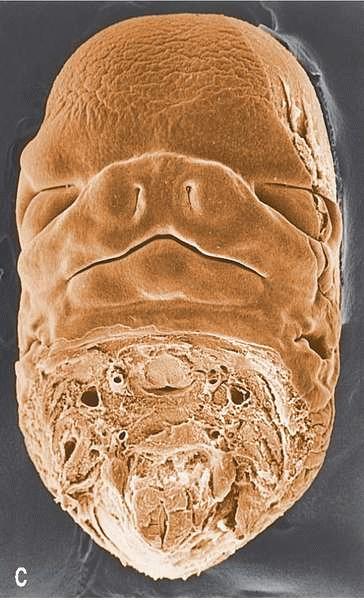 Scanning electron micrograph of the face of a stage 18 (17.5-mm) human embryo in frontal view. Observe the fused processes making up the nose, the maxillary processes, and the mandibular processes delineating the mouth. ×14. 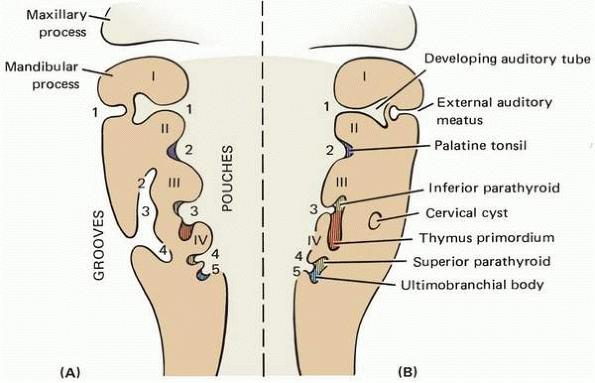 Early development of the pharyngeal grooves and pouches. (A) Early development. (B) Later development. Observe the second arch overgrowing the second, third, and fourth grooves leaving a cervical cyst in drawing B. Note the diverticula of pouches three and four as each develops dorsal and ventral prolongations.
The mesenchymal cells forming much of the ventral regions of the developing pharyngeal arches are derived from neural crest cells originating from the vicinity of the midbrain region and the rhombomeres. During early pharyngeal arch formation, these cells express homeobox gene (Hox gene) products indicative of the region of their origin.
Continued development and growth of the arches results in their fusion in the anterior midline. Each arch will develop its own bone, cartilage, vascular, muscular, and nerve components. The arches form sequentially from rostral to caudal, with the first arch being most highly developed and the last arch being poorly developed. The first and second arches are named “mandibular” and “hyoid” arches, respectively, whereas the remaining three are unnamed. The discussion of pharyngeal arch derivatives that follows is summarized in Table.
a The origin of some of the muscles of the pharynx is as yet unclear. The pharyngeal constrictors may in fact receive innervation from more than one source.
b Although this named branch of the vagus nerve is traditionally described as the motor innervation to the identified laryngeal muscles, it is important to remember that the motor fibers of the vagus nerve, at least in this region, are actually motor fibers contributed to the vagus nerve from the cranial portion of the accessory nerve (cranial nerve XI).